As the entertainment continued into the afternoon, the field beyond Four Mill Run Park overflowed with spectators. 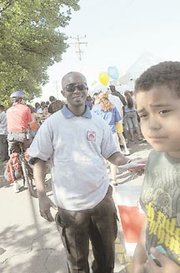 Local food vendors provided a variety of Latin dishes to the visitors of the annual festival.

Streets were packed with cars of people attending the festival. Sidewalks were filled with people from the neighborhood coming to enjoy the festivities. Children immediately flocked to the carnival rides and games at the festival’s entrance. Hanna El-Baba described the games as "full of excitement and adventure." Youngsters eagerly tried to win toys and animals. "It’s hard to win a hermit crab," Hanna said as she carried home her new pet.

Further into the festival were tents selling clothing from traditional Latin American dresses and jewelry to soccer jerseys from Guatemala, El Salvador, Nicaragua, Houndouras, Brazil, and Mexico. Other tents sold toys, DVDs of Spanish movies, and CDs of Latin music.

Then came the tents full of grills and hot plates, with the wafting smells of Carne Asada, pupusas, and other ethnic foods. In another section, through the sea of umbrellas trying to block the hot afternoon sun, festival goers could watch musical acts in all sorts of genres, from traditional Latin music to rap to rock, all in Spanish.