School’s Out, NVSL Now in Session

Mount Vernon Park swimmers gather in the center of their pool for a team cheer before the final relay events of Saturday’s meet against Ravensworth Farm. 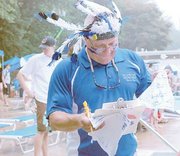 Coaches play an important role during the summer swim season by integrated fun with competition. “Coach Ron” of Hollin Meadows tracks his swimmers’ events while displaying his own team spirit.

It was a close race during the 15-18 girls 50-meter butterfly event that took place at last Saturday’s meet between Mount Vernon Park and Ravensworth Farm.

John Stout, 11, of the Hollin Meadows swim team competes in the men’s 50 meter breaststroke in Saturday’s meet against Riverside Gardens.

Green swim caps were barely visible under the mounting wave in the center of Mount Vernon Park’s lap pool. The entire summer swim team gathered in the center of the lane lines to yell one last cheer before the final event of the meet. The continual displays of spirit not only got the summer swim season off to an enthusiastic start, it also pushed Mount Vernon Park to an opening weekend victory over Ravensworth Farm, 227.5-174.5.

While the rainy weather may have been less than ideal Saturday morning at Mount Vernon area pools, nothing could dampen the spirit of swimmers celebrating the start of the Northern Virginia Swim League season. Parents sported umbrellas and ponchos as swimmers, inevitably wet with or without the rain, raced on.

Now in its 53rd year of existence the NVSL provides an outlet each summer for the area’s youth to compete in the pool.

“Meets are my favorite part because I see a lot of friends,” said nine-year-old Willie Nye of Mount Vernon Park. “And you show how fast and hard you worked, and hopefully win.”

The competitive swimming circuits of the winter may be top notch around here — Maryland-based programs Rockville Montgomery Swim Club and Curl Burke are the No. 1 and 2 ranked club teams, respectively, in the entire country — but ask any swimmer and they’ll say their love for the sport was born in the summer, in less-pressurized atmospheres like the NVSL.

Because most importantly, summer swim season reunites a family of sorts, the kind that has been built on a ritual of fast swimming, encouragement, and fun each weekend over many years.

“I love cheering for the team because we all come together and it’s the spirit of swimming in you,” said Cameron McNutt of the Hollin Meadows team.

Although Hollin Meadows lost their first meet to opponent Riverside Gardens, 204-163, swimmers like six-year veteran Zoe Riviere sat through the rain to show her support. Old and young alike kept meet officials busy as they jumped up and down on the pool deck to cheer on their fellow Barracudas.

Lauren Crow, an assistant coach at Hollin Meadows, acknowledges the social importance of the team to its members.

“It keeps them busy, it keeps them out of trouble,” said Crow. The 19-year-old coach notices how her swimmers make new friends outside of the school environment, a reason many join the league to begin with and keep coming back.

“I always get to see new people during the summer,” said eight-year-old Alex Innis of Hollin Meadows after swimming her two events of the day.

Coaches like Crow will balance this social aspect with competition through various events during the season. Weekly Friday pep rallies allow team members to get a little wild with demonstrations of team spirit. Even in the height of a meet’s competition, face paint and costumes like Crow’s tribal headdress decorate the pool decks in a demonstration of team loyalty.

The coaches’ social efforts make an impact on their swimmers. Maddy Howe, an eight-year-old swimmer for Mount Vernon Park said, “I love the practices because they are always really fun with the coaches.”

Children ranging in ages from eight to 18 competed in last Saturday’s meets, but some are as young as five when they join the team. No matter what age, though, swimmers like Riverside Garden’s Gen Kobayashi will continue to look forward to Saturday meets, a tradition that is alive and kicking in this area.

“I keep coming back with my team, I grew up with it,” said Kobayashi, an 18-year-old.