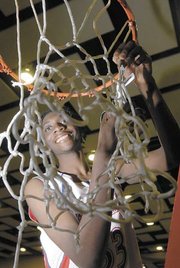 T.C. Williams junior Billy Rowland, a transfer from Bishop Ireton this season, smiles as he cuts down the nets at Robinson High School after the Titan boy’s team took home its third-consecutive Northern Region Championship with a 59-52 win over Hayfield. 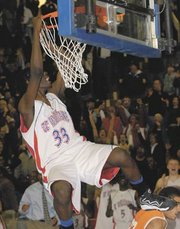 Junior Billy Rowland slams home T.C. Williams final points of the night Tuesday. The Titans will face either Petersburg or John Marshall on Saturday night in the state quarterfinals. 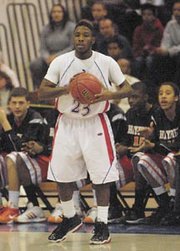 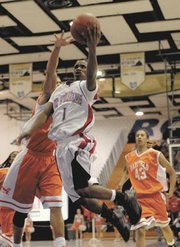 Senior Gavin Peterson goes up for two of his 14 points Tuesday night against Hayfield. He was named to the all-tournament team thanks to his work off the bench for T.C. Williams.

It wasn’t as if T.C. Williams junior Billy Rowland didn’t believe his new coach and teammates when they told him he was joining a dynasty, he just didn’t have any hardware of his own to back up the claim.

While his teammates had the confidence of last year’s state title to back up their claims, Rowland, a transfer from nearby Bishop Ireton, “didn’t have that Titan swagger yet,” according to fellow junior Ryan Yates.

Judging from the grin on his face after the T.C. Williams boy’s basketball team captured its third-consecutive Northern Region championship with a 59-52 win over Hayfield Tuesday night, Rowland can now boast with the best of them.

“I believe this is the third year in a row we’ve won the regional tournament, so if it wasn’t a dynasty yet, it’s gotta be now,” said Rowland, who bore the marks of a physical battle with a bloodied lip and jersey. The 6-foot-6 forward scored 17 points, grabbed 10 rebounds, and capped off the victory with a rim-rattling dunk. “They got my blood, but I got the win.”

T.C. Williams (27-2) now moves onto the state quarterfinals against either Petersburg or John Marshall at Robinson Saturday night.

&lt;b&gt;IT WASN’T AN EASY&lt;/b&gt; road for the Titans, despite cruising past fellow Patriot District foe Lee, 79-61, in the regional semifinals — the fourth time T.C. Williams beat the Lancers this season.

To secure their 71st-straight win over conference opponents against Hayfield Tuesday night, the Titans would need a comeback.

T.C. Williams came out timid in the first half, giving up careless turnovers, playing poor defense, and in general, not exhibiting the moxie fans have become used to when it comes to these Titans. The team trailed, 26-21, at halftime and coach Julian King let them know about it. During a “heated” talk in the locker room, King implored his team “to stop playing scared,” according to senior Gavin Peterson, who had 14 points and was named to the all-tournament team.

“We were shaky at the beginning, but we found it in our hearts to play defense, and we ended up getting a lot of points out of our defense,” said senior Edward Jenkins, who had a team-high 18 points and was named the Northern Region tournament MVP.

The Titans came out pressing full court, and it was Hayfield that succumbed to sloppy turnovers and bad shot selection. Tied at 44 apiece with less than four minutes remaining, T.C. Williams made its final charge, as Rowland and Jenkins combined to score seven consecutive Titan points, punctuated by a Jenkins three-point play.

Some clutch free throws down the stretch, combined with that tenacious, turnover-causing pressure defense left the Titans with the familiar task of cutting down the nets once again.

“I probably shouldn’t say,” joked King of what he told his team at halftime. T.C. Williams had beaten Hayfield twice during the regular season, a 71-66 overtime win on Jan. 21 and a 61-55 victory on Feb. 13. “But I did enough to light their fire, and a lot of it was just reiterating the fact that we have to be focused and execute and play within our game plan.”

&lt;b&gt;WHILE PLAYERS TREATED&lt;/b&gt; the regional title as just another example of the dynasty they’ve created, King reflected back to the beginning of the season, when expectations for this year’s team seemed to be through the roof.

While Jenkins and Yates got significant playing time during last season’s state title run, many on this year’s squad had limited experience performing under the brightest of lights.

“I knew we could do this, but I didn’t think we could do it in the way we did it,” said King. “It is beyond my wildest imaginations that we went [undefeated again] against the district.”

Being the elder statesmen, Jenkins’ attention had already turned towards the state tournament as he took pictures with the cut-down net around his neck. A member of the varsity team throughout his high school career, he has plenty of region titles to gloat about later.

“This all just feels like a big win,” said Jenkins of his three regional titles. “But we aren’t finished yet. I’m gonna tell my guys as soon as we get in the locker room to not get complacent because we got another stage, a big stage, bigger than this. We want to win states again.”