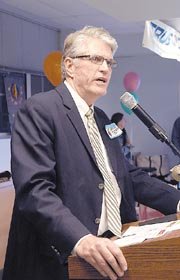 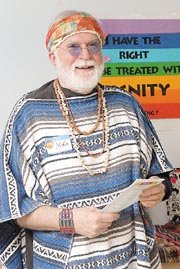 Dr. Michael Gilmore, executive director of the Alexandria CSB, in ‘60s costume was emcee for the 40th anniversary celebration which brought out about 500 guests.

Mayor Bill Euille issued a proclamation honoring both the Community Services Board for their 40th anniversary and the Alexandria Friends of Mental Health Center, celebrating their 25th anniversary. Receiving the proclamation is Mary Anne Weber, chair of the CSB.

Guests dig in to the food provided by local restaurants, bakeries and grocery stores.

Encouraged to come in costume, guests got into the mood when offered peace signs and flowers to wear in their hair as they listened to ‘60s music, ate from a buffet provided by local businesses, watched historic slide shows provided by the CSB and Friends and looked at the art on the walls of the GW cafeteria provided by clients from Vocational Services, the Clubhouse and Juvenile Detention.

The cafeteria was transformed with tie-dyed draperies, balloons and hanging beads while Dr. Michael Gilmore, executive director of the CSB, got into the mood of the evening with a complete ‘60s costume down to sandals and granny glasses, a la John Lennon. After hearing several jokes and puns, some of the council members suggested he could help with the city's shortfall by taking the show on the road.

Mayor Bill Euille presented the CSB and Friends with a proclamation honoring their service while Vice-Mayor Del Pepper and Councilman Rob Krupicka recalled their days as members of the CSB. Pepper was involved in the very beginning of the CSB, "the first board I ever served on," she said while Krupicka served in the ‘90s and navigated the minefield of persuading his Del Ray neighbors to accept a group home.

Proof that attitudes have changed for the better is the fact that Krupicka is now a councilman and Del Ray has more group homes than any other part of the city.

After the food, the speeches and the poetry came what everyone was waiting for, the dancing. As ‘60s music blasted, the crowd took to the floor and although many were not even born in the ‘60s, they certainly knew the music. For many of the clients who attended, a party is a rare thing, and they were determined to enjoy every minute of it.