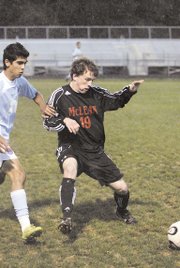 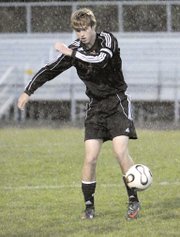 McLean forward Sam Radelet scored 17 goals this season. He has been named the Liberty District Player of the Year.

The poor, rainy weather did its best to put a damper on the McLean versus Marshall High boys’ soccer playoff game on Monday night, May 11, at McLean High. But in the end, rain and all, both teams played a more than respectable match in the first round Liberty District postseason contest.

The steady downpour, which began at opening kickoff, continued throughout the 80 minutes of on-field action. With no thunder and lightning, the game went on.

"It was a dog fight," said McLean coach Mike Anderson, whose team bested the underdog, hard-playing Statesmen of Marshall, 1-0. "[Conditions were] so sloppy we had a harder time getting accustomed than usual."

With the victory, No. 1-seeded McLean (10-2-1 overall record) advanced to Wednesday’s semifinals where it is scheduled to play the South Lakes-Jefferson winner in a 5 p.m. start at Stone Bridge High School in Ashburn. A second boys’ semifinals contest will take place following the McLean game in what should be an exciting evening of district playoff soccer.

McLean’s first round win over Marshall also assured the Highlanders of a seeding in next week’s 16-team Northern Region tournament. For a program that finished with a 4-8-2 record a year ago, the 2009 spring season has been a dramatic turnaround campaign for coach Anderson and his players.

"I knew at the beginning of the season we had something special," said McLean senior goalie Devin Imholte, who played a solid game and made several good stops, especially when Marshall turned up the offensive intensity in the second half. "We just want to take things one step at a time. You always have to be looking ahead to your next opponent."

Since a 5-2, non-district home loss to Westfield High on March 23, the Highlanders have gone 8-0-1, the tie game coming at local rival Langley, 1-1, on April 23. McLean has evolved into a region force and will be a tough draw for any opponent it faces at regionals next week.

&lt;b&gt;IN THE MOMENTS&lt;/b&gt; prior to Monday’s game, the Highlanders highlighted the achievements of their 12th grade team members in brief Senior Night ceremonies. The rain held off throughout the formalities as the team’s eight seniors were introduced along with their families.

But once the game began, the rain clouds opened up. McLean got the better of the play throughout the first half with the Statesmen making occasional offensive rushes.

The game’s only goal came with just over eight minutes remaining in the first half – a stunning, beautifully struck ball off the foot of senior midfielder Dominic Ferrari. From about 20 yards out, Ferrari, whom his coach calls a "game-changer" because of his knack for making big plays, sent a sizzling shot that soared high into the left side of the net.

"It was a huge relief [to score]," said Anderson, of his team’s first-half goal. "Marshall was playing so good."

The 1-0 lead would hold, but it was not an easy victory for the Highlanders, who had to hold off a determined Marshall team that seemed to get better as the contest wore on. The Statesmen pressured McLean’s defense with more regularity throughout the latter half and the team, coached by Ricardo Silva, looked to be anything but the tournament’s No. 8 seed. But the steady McLean defense more than held its own.

It was quite a different game than the regular season meeting between the two teams when McLean won rather handily at home, 5-1, on April 27.

Imholte, the McLean goalie, was not at all surprised with how well Marshall played in the playoff meeting.

"I knew it would be rough," he said. "We had to scrap for everything we got. My back line did fabulous."

Of his reaction to teammate Ferrari’s goal, Imholte, from his long range view from the other net, was ecstatic like the rest of his teammates.

"It was exciting," he said. "I was going crazy back there."

Of playing in the downpour, the talented goaltender said, "It was very messy and the ball’s trajectory is different [in the rain]. And it skips a lot faster [on the ground]."

For Marshall, the loss to McLean marked the end of the season. It was the final high school game for the following seniors: goalies Michael Pajoohi and Micahel Griswald; midfielders Misha Smarzik, John Peterman, Thomas Molfino and Omar Soubra; and striker Giuseppe Stalteri.