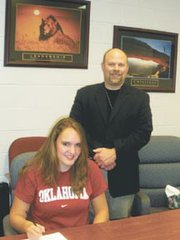 Pictured here with principal Tim Thomas, Westfield senior Virginia Ratliff signs her National Letter of Intent to attend the University of Oklahoma on a crew scholarship. 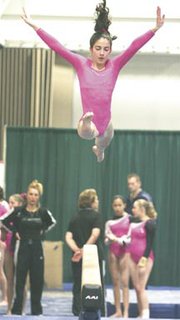 Paul VI sophomore Liz Salzano has qualified for the National Gymnastics competition, to be held May 14-18 in Seattle.

Dan Grimm led his Centreville boys’ outdoor track and field team to a second-place finish at last week’s Concorde District championships by posting a pair of first-place times in the 800- and 1,600-meter runs at Westfield High School. He ran the second leg on Centreville’s victorious 4x800 relay team of Tyler Bickley, Yazid Zouaimia and Mattson Heiner. As a team, Centreville totaled 101 points -- four less than first-place Oakton. Dominique Bacote stood out as well, capturing first place in the 300 hurdles.

Kaylin Newman and Julian Bellamy were the names to note for Westfield. Newman won the shot put and discus, as the girls’ team finished third with 84 points. Herndon won it all with 134. Bellamy, meanwhile, won three events, including the 110 hurdles, long jump and triple jump. He also anchored the victorious 4x400 relay team of Taylor McGough, Jordan Lehman and Seung Mo Yang.

Centreville High School junior Jenna Richmond was named the 2008-09 Gatorade Virginia Girls’ Soccer Player of the Year. She is now a finalist for the national award, to be announced in May. The award is based on outstanding athletic excellence, high academic achievement and exemplary character both on and off the field. Richmond is a member of the U.S. Soccer Federation Under-20 Women’s National Team player pool and was a two-time youth All-American selection by the National Soccer Coaches Association of America. TopDrawerSoccer.com rates her as the top recruit for the class of 2010. At the time of her selection, Richmond had five goals and three assists for the Wildcats. Outside of soccer, Richmond has a 3.34 GPA and is a member of the Future Business Leaders of America. She has also been a part of Centreville’s student government leadership council and was a volunteer youth soccer coach.

Centreville resident Lia Salzano, a sophomore at Paul VI, has qualified for the National Gymnastics competition, which was scheduled for May 14-18 in Seattle. Salzano placed in the top eight at the regional meet and is now one of seven gymnasts representing the Eastern Region. Salzano began gymnastics at the age of 3, and, in addition to working out over 20 hours a week at Capital Gymnastics in Burke, she also volunteers with the Special Olympics as a coach on weekends.

The Chantilly Student Government Association will host Chargerball on Thursday, June 4. The event will be held in the school’s gymnasium from 3 to 5 p.m. Sixteen teams will participate for the right to be called "Chargerball Champions." All students are invited to come watch the event. Admission is $2. Over the past years, this event has become increasingly popular, with hundreds of students attending as spectators.

Westfield senior Virginia Ratcliff has signed a National Letter of Intent to attend the University of Oklahoma on a full crew scholarship. Ratliff, who rows both port and starboard, also competed with Thompson Boat Center (TBC) in Washington, D.C. in the summer and fall of 2008. As a team, Westfield will compete at the Scholastic Rowing National Regatta in Lake Mercer, N.J. on May 22-23. In addition to crew, Ratliff is the senior athlete representative for the Potomac Valley Swimming Board of Directors. And during high school, she has been involved with the Fellowship of Christian Athletes, the National Art Honor Society and received the President’s Gold and Bronze medals for over 400 hours of volunteer service in the community.

The ODFC Revolution, a rising girls’ U-12 soccer team playing in WAGS, will hold tryouts on May 26 and May 28 from 6-8 p.m. and on June 2 and June 4 from 6-8 p.m. at Little River Elementary School in South Riding. The Revolution trains and plays year-round, both in the WAGS regular season and in tournaments across the region. The team includes players from Loudoun County, Western Fairfax County and Prince William County. Its coaches have USSF National D licenses, including a former U.S. National Team goalkeeper. To register, contact team manager Lori Campbell at 703-327-9332 or lsc6@verizon.net. For more information, visit the Revolution’s Web site at http://www.thesoccersite.biz/odfcrevolution/.