The Mount Vernon boys’ lacrosse team celebrates its National District championship two weeks ago. “I guess it used to be a predominant white sport,” said senior Marcus Jones. “But everyone is starting to pick up on it.”

The Majors had 10 African-Americans and several Hispanics in uniform for their Northern Region quarterfinal game against Robinson last week, and a few more non-white players standing on the sidelines.

Senior Brian Green and junior Habib Balde go for a ground ball during a game earlier this season against Yorktown. Both were first exposed to the sport of lacrosse in high school, a fact that sometimes disadvantages them against more experienced opponents. 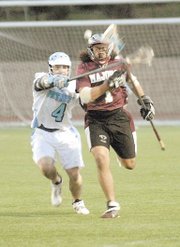 It was Mount Vernon senior Brian Green’s final high school sporting event before leaving for college when the Majors boys’ lacrosse team took on Robinson in the Northern Region quarterfinal last Thursday. And, as she was throughout the spring and the entire football and basketball seasons, his mother, LaTanya Green, was there to support her son.

On the field, much was the same as well. Mount Vernon, from the traditionally weak National District, was in the process of falling to the two-time state champion Rams by a score of 15-4.

But as Green looked more closely from the stands, there was a distinction between the teams more visible than any scoreboard. Mount Vernon had 10 African-Americans in uniform, several more of Hispanic descent and a few more non-white players in street clothes along the sideline. Robinson, on the other hand, had just two African-American, two others of Hispanic descent.

Welcome to the life of the Mount Vernon Majors, a collection of students that might just comprise the area’s most diverse lacrosse team, quite an achievement considering the sport’s rise to popularity came through the ranks of elite prep schools along the east coast.

“I notice that I’m often the only [black] parent in the crowd,” said Green, an account manager at a consulting firm. “I don’t take issue with that. I remember Brian’s freshman year was interesting because I could tell which one he was since he was the only one with dark legs. It was easy to spot him.”

&lt;b&gt;WHILE LACROSSE&lt;/b&gt; is still relatively new as a varsity sport in Virginia — the first public school state championship didn’t take place until 2006 — African-Americans have been taking part in the sport for years, most notably the legendary NFL running back Jim Brown, who played as a student at Syracuse in the 1950s.

But widespread involvement within the black community is still in its infancy. Just last year in the collegiate ranks, twin brothers Rhamel and Shamel Bratton and Will Barrow of University of Virginia’s men’s lacrosse team became the first trio of black midfielders to play in a game simultaneously. On the same day, Ryland Huyghe of Cal State-Fullerton became the first African-American coach to win a league championship.

The trickle down effect of such milestones are starting to be felt in places like Mount Vernon, where participation by African-Americans has increased in both the high schools and Fort Hunt youth leagues.

Junior Habib Balde has a story similar to many players currently on the Majors team. A football and basketball player, Balde was approached by a JV lacrosse coach in the weight room during his sophomore season, wondering whether he’d be interested in picking up the sport.

“I didn’t even know what it was,” he said. But the coach showed him some youtube clips of the hitting and checks involved. “I tried it out for the first week,” said Balde, who was named to the all-National District first team two weeks ago. “And I couldn’t put the stick down.”

He said players like Green served as a role model for the rest of the African-Americans in school, showing them that more than white people could play the sport, and the program has seen a proliferation of diverse freshmen and sophomore classes join the junior varsity squad as a result.

“It’s something we’re proud of,” said Balde. “We have a sense of pride because every year it gets bigger, every year we get more black kids joining.”

But both teams, whether that’s Mount Vernon or its opponent, feel a bit of tension being in such opposite sides of the spectrum in terms of diversity.

Senior Marcus Jones, Balde, and Green all said players sometimes feel the stares of other teams when they walk onto the field for warm ups. Balde added that occasionally a derogatory remark is exchanged. It’s an awkward situation that brings to light some of the racial barriers that still need to be hurdled around the area.

“They saw us warm up and I just saw the looks in their eyes. I could tell they were counting,” said Balde, referencing a specific game this season. “And then when we’re on the field, they were asking us ‘Do you guys play football, do you guys play basketball,’ asking us stereotypical questions. I hear it, but it’s whatever, I just block it out.”

“Other teams, they’ve got one black kid on their entire team and we come out and it’s like almost half our team is black,” said Jones “It’s kind of weird.”

&lt;b&gt;COACH DALE NALLS&lt;/b&gt; doesn’t think the difference in the make-up of his team compared to others is weird at all, though. He sees his lacrosse team as an extension of the community, a coming together of different cultures. He said the biggest difference between Robinson and Mount Vernon last week had nothing to do with skin tone, rather “[Robinson] kids get a stick put in their hand in third grade, second grade, first grade. The Mount Vernon guys don’t get exposed like that.”

Nalls has been with Mount Vernon lacrosse in some capacity for the entirety of the program’s 13-year existence. He has a picture in his office of his 2004 National District championship team that he looks at almost every day. The collection of different types of happy faces always puts a smile on his face. It reminds him exactly why he loves the sport of lacrosse, no matter what color barrier it may or may not transcend.

“It’s about giving the game to anybody who wants to play the game,” said Nalls. “That’s what it’s all about. That’s what I’m doing here. Some guys, all they’re worried about is trophies. To me, my trophy is every kid that I can ever give this game to. … If I can extend my hand and get one kid to come out here and not do something that he shouldn’t have been doing, if I can change one kid’s life because I put a lacrosse stick in his hand, then I’m going to do it.”