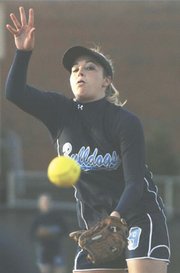 Cassie Phillips and the defense behind her have been the strengths of this year’s Stone Bridge High girls’ softball team. Phillips, the team’s senior pitcher, and the Bulldogs captured the Liberty District crown on Monday night with a finals win over Marshall.

The victory was particularly gratifying for a Stone Bridge team which a year ago could not hold onto a late-game lead against Langley in the district finals.

This year’s team, however, took the tournament title. The Bulldogs (18-5) finished the regular season standings in a second place tie. But they won all three of their district playoff games to earn crown, the tournament victories coming over Woodson, 6-4, Madison, 3-2, and the underdog Statesmen squad in the championshi p meeting.

"We’ve been led by our seniors," said Stone Bridge head coach Rich ‘Sully’ Sullivan, who was an assistant coach on last year’s Bulldogs’ team that was under the direction of former head coach Mike Skinner.

Stone Bridge, which finished 11-3 in district play during the regular season, has received an outstanding spring from senior pitcher Cassie Phillips (15 wins), a First Team All-Liberty District selection. She was also the Bulldogs’ starting pitcher in 2008. Next school year, Phillips will be playing the sport at Div. 3 Lynchburg College, where she has earned an academic scholarship.

Sullivan said Phillips has been a steady presence on the mound for his team.

"She’s not an overpowering strikeout pitcher, but she places the ball well," said Sullivan. "She’s been a workhorse for us."

Prince, the team’s leadoff hitter, leads the Bulldogs with a .486 batting average. She has the ability to slap the ball past charging infielders for half-swing base hits as well as putting a charge into the ball with sizzling line drives into the outfield gaps.

"She kind of sets the table for us," said Sullivan. "She’s super fast and she’s our stolen base leader."

Of Stone Bridge’s five losses, four have been by one run. The Bulldogs stay in ball games with their fine pitching and glove work.

"I think our team strength is pitching and defense," said Sullivan, matter-of-factly.

Monday’s championship win over Marshall makes the Bulldogs 3-0 against the Statesmen this spring. Stone Bridge defeated Marshall by scores of 7-0 and 4-1 during two regular season meetings.

Coach Sullivan is a graduate (Marshall Class of 1974) of the school his team beat in the finals. He played baseball while at Marshall and eventually was the program’s head coach from 1989 through 1995. In recent years, he was a Madison High baseball assistant from 2004-’07 before joining Skinner’s softball staff at Stone Bridge last year.

Stone Bridge will begin play in the Northern Region tournament later this week.