A Marathon of Marathons
Votes

A Marathon of Marathons 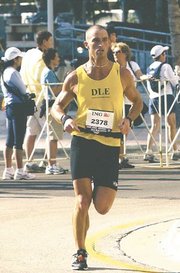 Doug Eldridge, an alumnus of West Springfield High School, is raising awareness for the Wounded Warrior Project by running 10 marathons in one calendar year. The U.S. Marine Corps Marathon will be his ninth.

When Doug Eldridge reaches the 25th mile mark of the Marine Corps Marathon on Oct. 25, a point where some runners feel the urge to quit, the West Springfield High School graduate can glance at the Pentagon for a burst of motivation.

The Springfield native is running 10 marathons — each one is 26.2 miles — in one calendar year to help raise money and awareness for the Wounded Warrior Project.

His goal is to raise $100,000 for the charity that benefits soldiers with service-ending injuries.

"There's so much emphasis placed on the body count overseas," Eldridge said. "People forget about those who are coming back with injuries."

Eldridge said he is currently halfway to his goal and the U.S. Marine Corps Marathon will be his ninth race of the year.

It also will be one of the most inspirational races of his journey.

"The Marine Corps Marathon is the spirit of the military every step of the race," he said. "From the military sights in the area to the soldiers blocking off the course, it's just all around you. This will be the most special race because it's sponsored by the military and it’s in my hometown."

Eldridge said the sight of the Pentagon wall that was attacked on Sept. 11 also will motivate him when his body is ready to give up.

"[The 25th mile] is where all you want to do is quit," he said. "You're just running on pure adrenaline. Arlington Cemetery and the Pentagon overlook that part of the run. It reminds me of why I'm doing this marathon."

Eldridge, an attorney and sports agent with DLE Sports Management in Washington, D.C., said he first learned about the Wounded Warrior Project after running in a race the group sponsored at Burke Lake Park last year.

The Wounded Warrior Project's mission resonated with Eldridge, whose father was a career Army officer. Eldridge decided to combine his passion for running with his support of the armed forces.

"When people first hear about [the idea of running 10 marathons] they ask if I'm joking," he said. "They think they misunderstood exactly what I said."

Although Eldridge could forgo the marathons and just raise money by traditional means, he believes his athletic feat will do more to build awareness for the cause.

"I could have just hosted a few high-profile dinner parties and raised the $100,000 quickly," he said. "But if we use fitness as a platform, it garners participation. It raises awareness.

What is a fund-raiser going to do other than just raise money? If you're going to create buzz [around your fund raising] it's got to be extreme."

ELDRIDGE’S MARATHON of marathons started on Jan. 25 with the ING Miami Marathon. Since then, he's averaged a marathon every five weeks, a grueling pace that has pushed the limits of his body.

"A marathon is just brutal on the body," he said. "You can't fake your way through a marathon. It's like a final exam. You can't just show up and expect to finish without training or being in shape."

While Eldridge's marathon-based campaign is one of the more extreme fund-raising efforts, Ayla Hay, spokesman for the Wounded Warrior Project, said it's not uncommon for others to commit to arduous athletic events to bring awareness to the group.

"We have had people all across the country run marathons, swim hundreds of miles and ride motorcycles all to raise awareness," Hay said.

Regardless of whether a donor chooses to write a check or run a marathon, the group is happy to have the support.

"We are always so thankful and inspired when we hear of people like [Eldridge] devoting their time, energy and resources to our nation's wounded warriors," Hay said. "We could not provide the services and programs that are so valuable to their recovery without such support