Senior quarterback passes for 297 yards in win over West Potomac. 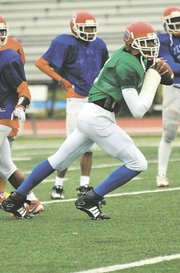 Joe Hargrove’s first varsity pass was dropped. His second throw was intercepted. Pass No. 3 resulted in another drop.

In the senior quarterback’s debut after missing the first seven games with a fractured right, non-throwing wrist, the T.C. Williams offense got off to a start as dreary as the cold, wet weather it was playing in.

It took Hargrove and the Titans time to warm up. But the confident, strong-armed signal caller treated those T.C. Williams fans that braved the elements at Parker-Gray Stadium on Saturday to a record-breaking performance.

Wearing a cast covered in bulky padding on his right forearm, Hargrove completed 17 of 35 passes for a single-game school-record 297 yards during a 38-37 victory over West Potomac. Hargrove also tied a school record with four touchdown passes in one game. Hargrove snapped Efi Eyo’s passing yardage record of 274, set on Oct. 30, 1999, and tied the touchdown mark held by Tommy Thompson (Nov. 11, 1966) and Glenn Williams (Oct. 7, 1983).

While his statistics are impressive, Hargrove’s impact is far greater than ink in a record book.

Hargrove’s passing talents kept a defense from loading the box in an attempt to stop the run. While Hargrove was out, the Titans struggled through the air and were left trying to run the ball against defenses aggressive toward stopping the ground game.

Hargrove’s ability to throw the ball deep down the field also allows more of the Titans’ playmakers to get involved. For the first seven weeks, the T.C. Williams offense consisted of Cortez Taylor or Robert Carter running the ball, or an attempt at a short-to-intermediate pass. Now, players who were mentioned as gamebreakers in the preseason have a chance to make an impact.

"That’s what we envisioned when you run that offense," T.C. Williams head coach Dennis Randolph said. "You spread the ball around, who [is the defense] going to cover? Who are you going to double team?"

Wide receiver Aziz Coker caught six passes for 68 yards against West Potomac. The senior said the offense has more of a swagger with Hargrove at quarterback.

"I’m more active, more in the game," Coker said of having Hargrove in the game. "When I’d run a go [route earlier in the season], the moment I passed 10 yards, I’ve got to stop. With Joe, he threw the ball like 80 yards and he still overthrew me."

"It’s fun," Jenkins said. "We’ve got the connection. [Hargrove’s] got the connection with all the receivers. He knows what to do in [certain] situations. … I know there’s always a chance [I’ll get the ball] with Joe — especially the deep ball."

Carter, Taylor, Israel Richardson, Tyrell Sitton and Will Rossi each had at least one reception for T.C. Williams.

"They have to respect our passing game," right tackle Jay Whitmire said. "That really helped us out on the O-line, not having to run the ball every play."

Hargrove also showed his teammates the ability to lead them back from a deficit. Trailing 31-23, Hargrove connected with Jenkins for a 15-yard touchdown in the third quarter and found Carter for an 8-yard score in the fourth to put the Titans ahead, 35-31. West Potomac regained the lead, but Hargrove drove the Titans inside the Wolverines’ 10-yard line late in the fourth quarter, where Manuel Benites drilled a game-winning 23-yard field goal.

Hargrove started the game on the bench. Doug Murphy, a junior, played quarterback during T.C. Williams’ first and third series, each ending in a punt. Hargrove played the second series, which ended with him throwing an interception, before leading the Titans to a touchdown on their fourth possession — a 22-yard pass to Jenkins. Hargrove remained at quarterback the rest of the game.

Hargrove said he was shaking off rust during the early drives, but felt started to get comfortable as the game progressed.

The win over West Potomac improved T.C. Williams to 4-4 overall, 2-3 in the Patriot District. The Titans haven’t won more than four games in a season since posting five in 1996. T.C. Williams hasn’t had a winning season since 1995, and only one since 1990.

Now the Titans are in a battle to make the playoffs. They travel to face South County on Friday and end the regular season Nov. 7 at home against Robert E. Lee.

"We’ve kind of got our backs up against the wall," Randolph said. "We have to win out — period — to get a chance. … I like our chances if we win two."

The junior offensive and defensive tackle Whitmire left the West Potomac game after injuring his left ankle but returned shortly after. He was in street clothes Tuesday but said he will play this week.

The playmaker Taylor left the West Potomac game after appearing to aggravate an injury to his left shoulder and did not return. Taylor originally sprained the AC joint in the shoulder on Oct. 17 against W.T. Woodson.

The senior did not practice on Tuesday but said he will play this week.

Taylor returned the opening kickoff 85 yards for a touchdown against West Potomac.