Qualifying for States in Nick-ley of Time
Votes

Qualifying for States in Nick-ley of Time 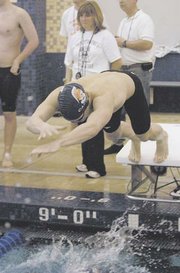 West Springfield swimmer Sean Nickley has battled with mere seconds over the course of the 2009-10 swim season.

The senior's attempts to reduce his 200-yard individual medley time to qualify for the state finals has always come up short of the 1:59.99 state cut throughout the season.

"I'd been dropping my time little by little," he said. "I've been to the [state finals] for relays, but [not for] for an individual event."

Time was running out. The Northern Region boys' meet on Feb. 15 at Washington and Lee was the swimmer’s last chance to earn a trip to the state finals in Virginia Beach on Feb. 19. With his back against the wall, Nickley took charge by changing more than his race plan.

"I hadn't worn a fast skin [swimsuit] or shaved my leg hair off this season," Nickley said. "I did both of those just for this meet."

Nickley hoped his competitive moves would take off that crucial second, but it would take more than a close shave to make states.

The individual medley is a grueling race featuring all four swimming disciplines — butterfly, backstroke, breaststroke and freestyle — but where Nickley said he usually succumbs to exhaustion, he persevered.

"Once I got into the breaststroke, I got a second wind," he said. "In freestyle, I'm normally dying, but I still had something in me."

He would go on to finish the night with three more state cut times: one as a member of the 200-yard medley relay, another in the 200-yard freestyle relay and another individual qualification in the 100-yard breaststroke.

"He deserves it," West Springfield head coach Karen Spooner said. "He's a talented leader, a talented swimmer and he's a senior. It's just a reward that justifies all his hard work."

Another struggling group of Spartans got their chance to book a trip to Virginia Beach as well.

Prior to the Northern Region meet, the boys' 200-yard medley relay was still searching for a core group of four swimmers that could earn a spot in the state finals.

"We've tried just about every different combination of boys for this relay," Spooner said.

The combinations produced the same results: a missed cut and a befuddled relay team. With one shot left, Spooner played a hunch that sophomore Matthew Garstka might provide the much-needed firepower.

Garstka joined Nickley, Colin Stephenson and junior Eric Phung to round out the Spartan's relay competitors.

"[Garstka] looked really fast in the warm-ups when were practicing so I put him in," Spooner said.

For Garstka, the chance to swim presented an opportunity to rejoin his former relay team, a team he had trouble staying on during his freshman season.

"I was knocked off the relay last year, then put in, then taken back out," Garstka said. "I wasn't really on it at all this season."

"We thought we made a smart choice by adding [Garstka]," Stephenson said.

Lake Braddock head swim coach Miriam Lynch is optimistic for the Bruins' future. At the Northern Region boys' meet on Feb. 15 at Washington and Lee, she saw two building blocks her team could use in upcoming seasons.

"My junior boys were awesome," she said. "[This meet] will motivate them for next year."

Despite more than a week of separation due to snowstorms, the team's unity remained strong, Lynch said.

"The meet kind of distanced us from each other," she said. "But the kids were still cheering for each other and were focused [on the meet]."

The meet's move from the usual site of Oak Marr Recreation Center — considered by some coaches as the fastest pool in the Northern Region — to Washington and Lee also forced the team to adapt.

"Our kids stepped up considering the circumstances they were given," Lynch said. "It wasn't the same venue, but [the meet] had the same feeling."

Of course that didn't mean the swimmers were pleased with swimming in a "slower" pool.

"I wasn't that excited about [the meet] because I really like the pool at Oak Marr better," said junior Troy Chewning, a member of the 200-yard medley relay.

Lynch was pleased with her team's results. " It was a great meet," she said.