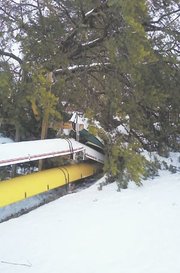 The Mount Vernon crew team is looking for assistance after some of its racing equipment was damaged in a storm.

Community support has played a significant role in the growth and success of the Mount Vernon crew team, which enters its ninth season of competition. But after a recent winter storm damaged an estimated five figures worth of team equipment, the Majors are in need of assistance more than ever.

Fallen trees, including a pine estimated at 100 feet, caused the damage. Among the affected equipment were two eight-person shells, two six-person shells and two singles. An oar rack, boat rack and a shed were also damaged.

Mount Vernon coaches gained access to their equipment at Fort Belvoir marina on Monday after snow was plowed. They arrived to an unpleasant surprise.

"The coaches that were there seemed devastated," team manager Robin Jones said.

While coaches were able to get close enough to see the equipment, some of the boats are still trapped under trees. Not all of the damage has been assessed and Jones said they couldn’t haul equipment anyway because they can’t get to the team trailer. Phillips said Forest Park High School agreed to let Mount Vernon use its crew trailer.

Jones said some of the equipment is insured, but the Mount Vernon program, which is not supported by Mount Vernon High School or Fairfax County, will have to raise money for repairs.

The Majors will take part in their annual "tag day," going door to door to raise money, on Feb. 27. The Majors have also taken part in garage sales and car washes, among other events, to raise money.

"This community has been very supportive of our program," Phillips, in his sixth year with the Majors, said. "I don’t want to use the word ‘begging,’ but we need help from the Mount Vernon community to get us back on the water. … Without a lot of help from the community, we’re going to have a difficult time."

The Majors are scheduled to begin practicing Monday, but that is unlikely to happen. Jones said while cold temperatures might cancel practice anyway, the Majors won’t be able to do much until debris is cleared. Mount Vernon’s first regatta, the Polar Bear Regatta, is scheduled for March 27.

"If the weather was 80 degrees on Monday," she said, "we still could not go on the water because of the tree and debris."

Phillips said it will likely take the team two weeks to get out on the water, and possibly longer for the girls team. Each boat that was damaged belonged to the girls team. He said the damaged boats were the team’s top racing shells, not practice shells. While the Majors purchase their equipment used, an eight-person shell can cost more than $10,000 - $25,000 if bought new, Jones said.