Stories To Watch for in 2010
Votes

With 2009 over-and-done, the top high school sports stories in 2010 are already taking shape. 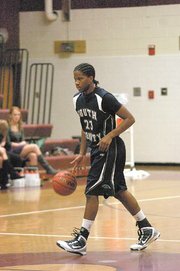 The South County boys’ basketball season hasn’t had a winning season in the school’s five-year history, but a 6-3 start suggests that the team might be on the verge of breaking its losing spell.

With the holiday tournaments over and just about every local high school basketball team about to enter the bulk of its district play, the basketball scene is primed to heat up the frigid month of January.

Here's a quick check-in with some of the local boys' and girls' teams for those just tuning into the basketball action.

In South County's five-year history, the boys' basketball team has never recorded a winning record, but in 2009-10, the Stallions are poised to add a winning season to the history book.

With a 6-3 record and key victories against Westfield and Robinson, the Stallions are on the verge of their best season in school history.

The good fortune isn't only with the boys' team, but the girls' team is also off to a strong start. The Lady Stallions have a 5-3 record, but are looking to rebound from two consecutive losses during the holiday tournament season.

The Woodson girls' team comes out of the holiday break with a 6-2 record, recording major wins over Fairfax and McLean. Led by senior Melissa Gallo, the Lady Cavs already have a 2-0 record against Patriot District opponents.

The Woodson boys' team has a 5-4 record after the break and has a 1-1 record in the Patriot District to start 2010.

After earning back-to-back victory against Fairfax and West Springfield in mid-December, the Robinson boys' basketball team is slumping. Since their Dec. 15 victory over West Springfield, the Rams have dropped five-in-a-row, but are looking to rebound against Chantilly on Dec. 8.

The Lady Rams currently have a 6-2 record and will have a chance to put some distance between themselves and the rest of the Concorde District when district play picks up in January.

A rocky four-game losing streak started the Lake Braddock boys' basketball season, but a string of four wins helped turn the start into a 4-4 record to end December. With a 0-1 record in district play, the boys' will look to January to make up lost ground on South County and T.C. Williams. The girls' team is currently 1-6 and starts its January play against West Springfield.

With the winter sports season nearing the midway point, it's not too soon to be thinking about spring training and the upcoming baseball season.

Local teams will be looking to build upon the success they shared in 2009, starting with Lake Braddock and their 17-7 season. The Bruins advanced to the state playoffs but were defeated by Hanover 0-4.

South County finished the 2009 season a strong 17-7 record and the girls' softball team dominated their competition en route to a 23-1 season. The Lady Stallions reached the state semi-finals but were defeated by Westfield 2-0.

Patriot District newcomer W.T. Woodson will be partaking in their first baseball and softball seasons in the Patriot District in 2010. The baseball team went 11-13 in 2009 and had their season ended by Westfield in the Northern Region playoffs.

Area teams will also be looking to battle for home-field advantage in the state playoffs.

Westfield will be hosting the VHSL State Baseball Finals in 2010 and if local teams can garner top seeds, they'll enjoy playing in the comfy confines of Fairfax County instead of journeying around the state in late May and early June.

Anyone hankering for some soccer before the FIFA World Cup in South Africa arrives in mid-June should check out the local high school soccer scene.

A good starting place for those craving the beautiful game might be Robinson Secondary School, home of the 2009 Northern Region Boys' Soccer Champions.

In addition to capturing the Northern Region title and the Concorde District title, the boys' team also shutout 10 opponents in the 2009 season.

With a season as successful and dominating as 2009, it's only natural that the Rams will have to contend with the ire of the Northern Region and play with a target on their backs.

South County’s soccer teams are looking to be one of those teams chasing a Northern Region title.

Other local soccer teams of note include the Woodson girls’ team who finished 2009 with a 13-1-2 record and the Lake Braddock girls’ team who recorded a 9-7 record in 2009.

That was until the Bruins stopped Midlothian from capturing their fifth straight state title at the 2009 state cross-country finals.

Although standout distance runner Liana Epstein will be graduating, the Bruins have found a new spark in a talented youngster. Freshman runner Sophie Chase finished second at the state finals and had another strong performance in the Northern Region finals.

With a VHSL record currently being shared by Lake Braddock and Midlothian, 2010 might be the start of Lake Braddock's attempt to re-claim the consecutive state titles mark for their own.

When it comes to ultra-competitive divisions, the NCAA has the Southeastern Conference, the NFL has the NFC East and the Northern Region has the Patriot District.

In the 2009 season, the historically strong Concorde District gave way to a new set of stars in the Patriot District.

The Patriot District also featured one of the best quarterback rivalries in the area between Lake Braddock’s Michael Nebrich and Woodson’s Connor Reilly.

Further cementing the power-swap, two of the Concorde District's playoff teams, Oakton and Westfield, exited the playoffs in the first round courtesy of Patriot District opponents.

While the Patriot District reigned supreme in 2009, the district is seeing some of its brightest stars leave at the end of the 2010 school year.

Regardless of what lies in store for the district in 2010, there's no doubt that 2009 brought out some of the best storylines in local area football and will be a must-watch district in 2010.