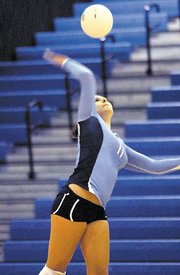 Yorktown outside hitter Elyse Bush was twice named National District MVP. Her senior season ended when she suffered a torn ACL on Oct. 28.

Yorktown senior Elyse Bush crumbled to the court in pain during an Oct. 28 match against Washington-Lee, having tore the anterior cruciate ligament in her left knee. The all-region outside hitter was helped off the floor and spent the rest of the match watching from the bench.

She took with her the Patriots’ hopes of repeating as National District champions.

The Yorktown volleyball team breezed through its district schedule and entered its regular season finale against Washington-Lee having not lost a district match since 2007. Losing a set to Stuart on Oct. 19 was the Patriots’ only district blemish during the two-season winning streak.

Bush was the primary reason behind Yorktown’s dominance. A four-year starter, Bush ended her prep career twice being named National District MVP and all-Northern Region. Her play was dominant, her kills decisive and her presence on the floor was like a security blanket for Yorktown.

When Bush went down with her knee injury, the Patriots fell apart. Washington-Lee rallied after losing the first set and won, 3-2.

Yorktown would regroup, beating Mount Vernon in the first round of the district tournament and winning a rematch with the Generals in the semifinals. But the Patriots didn’t have the fire power to get past district newcomer Hayfield in the title match. Yorktown swept Hayfield in the teams’ earlier meeting, but it was a different story without Bush.

Four days later, Yorktown’s season ended with a 3-1 loss to Herndon in the opening round of the regional tournament.

While the Patriots’ season ended with disappointment, there was a silver lining. The talented athletes who will return in 2010 gained postseason experience while facing a scenario similar to what they will encounter next season: no Elyse Bush to rely on.

Sophomore middle blocker Ashley Rock shined with or without Bush on the floor, finishing second to Bush in kills with 221 (Bush had 246). Rock, a first-team all-district selection, tallied 25 kills against Washington-Lee in the district tournament. Freshman outside hitter Katie Rock was third on the team with 114 kills. Junior outside hitter Malaika Bain-Peachey showed flashes of ability while taking over for Bush.

Yorktown has established itself as the National District’s most consistently successful volleyball program. But with the loss of Bush and the addition of Hayfield to the district, Yorktown head coach Brittanie Behar and the Patriots will have their work cut out for them in the future.

What happened in the fall: The volleyball team fell short of repeating as district champions, losing to newcomer Hayfield in the championship match. Key senior contributors Bush, setter Libby Kane and outside hitter Courtney Duran played their final season for the Patriots.

The football team closed the regular season with four straight wins to qualify for the playoffs, where it lost to Hayfield, 34-6, in the opening round. The Patriots experienced injuries at key positions during a 2-4 start, but the team bounced back with victories over Stuart (39-14), Wakefield (51-18), Mount Vernon (21-3) and Washington-Lee (28-10).

What’s next: The boys basketball team looks to build on its 1-1 start to district play. The Patriots lost to Washington-Lee and defeated Wakefield. Mike Veith and Jack Earley have carried Yorktown offensively, averaging 15.6 and 14 points, respectively. Head coach Richard Avila has said he wants more players to step up and score on a consistent basis. Yorktown travels to face Falls Church at 7:45 p.m. today.

The girls basketball team opened the season 0-5 against teams outside of the National District. But the Patriots are 2-0 in games that count the most — district contests — beating Washington-Lee and Wakefield. With one senior — Lindiwe Rennert — on the roster and a head coach in his first year with the program — Dave Garrison — the Patriots figure to improve as they continue to jell throughout the season. The Patriots host Falls Church at 7:45 p.m. today.

The swimming and diving teams look to continue their success. The boys and girls are both 4-0 in dual meets. Both return to the Yorktown pool at 6:30 p.m. Jan. 8 to take on Falls Church.

The gymnastics team has only five members and no seniors. The Patriots are looking to improve on a fourth-place finish at a five-team meet they hosted on Dec. 16. Yorktown hosts a meet Jan. 11.

The wrestling team travels to Washington-Lee for a co-Arlington meet at 1 p.m. Jan. 9.

What happened in the fall: The football team started 0-3 but won five of its next six games to give itself a shot at making the playoffs. The Generals fell short, however, losing to Yorktown, 28-10, during the regular season finale. Washington-Lee finished with a 5-5 record.

The offense was led by junior running back Anthony Taylor, who rushed for 1,082 yards and 12 touchdowns. Senior linebacker Rock Battle led the defense with 109 tackles.

The field hockey team finished second in the National District after a 1-0 loss to Mount Vernon in the tournament championship game. The Generals were on the attack for most of the game but failed to score.

What’s next: The gymnastics team, if its first two performances of the season were any indication, is one of the favorites to win the National District. Head coach Joe D’Emidio, in his 33rd season with the program, said the team during the first two meets produced some of the highest point totals during his tenure. Freshman Mary Lynn Clark is Washington-Lee’s top gymnast.

What happened in the fall: The football team lost its first nine games before beating Mount Vernon, 34-29, in the season finale. The Warriors lost by four points to Dominion (28-24) and by one point to Falls Church (28-27).

The volleyball team lost to Washington-Lee in the opening round of the district tournament.

What’s next: The girls basketball team, which started 3-5, 1-1 in district play, travels to take on Hayfield at 7:30 p.m. Jan. 8. Alison Butler is the Warriors’ leading scorer.

The football team started 4-1 but lost its final five games to finish 4-6. The Knights, who operate primarily out of the run-oriented double wing offense, averaged 25.3 points during their four wins and 4.8 in their six losses.

Greg Gadell led the team with 466 rushing yards and seven rushing touchdowns. Joshua Trimble rushed for 416 yards and one touchdown and William Connor totaled 319 yards and three scores on the ground.

What’s next: The boys basketball team , which won its first five games before dropping three straight, will host Paul VI at 7:30 p.m. Jan. 8.