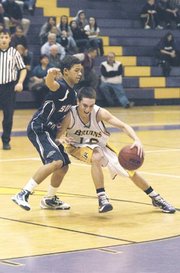 Senior guard Patch McLucas runs up against a South County defender in the Bruins 62-60 loss on Jan. 14.

Lake Braddock senior Patch McLucas wasn't about to let his team's 62-60 loss to South County on Jan. 14 sour his season.

After rallying back from an early deficit, the Bruins were unable to complete the comeback and earn an important Patriot District victory.

But it was a standout game for McLucas as he tallied 18 points from three-point shots and left the gymnasium with an idea of where his 6-7 team stands in the Northern Region basketball picture.

"I honestly like where we are," he said. "We're in close games and we're in it with every good team in the area."

It didn't start that way for Lake Braddock.

The Bruins dropped their first three games of the season, but charged back with four consecutive wins to salvage the poor start.

Since then, Lake Braddock has been battling it out in the Patriot District with a 2-4 district record.

The reason for the turnaround from three straight losses?

"The team has started to run the offense better," McLucas said. "And our defense is starting to win us games."

Even with the team's growing grasp of the offense, the Bruins have still struggled to build a consistent winning streak.

Since early January, the team hasn't been able to put together back-to-back wins, but has fought hard against teams such as T.C. Williams.

"We lost to Lee at the buzzer and we lost to South County at the buzzer," head coach Brian Metress said. "But we were tough with T.C. Williams and we got a nice victory over West Potomac."

Metress also attributed the strong showings against top teams to the squad's grit and determination.

"We're pretty gritty," he said. "It's a good quality to have. We're small, but we're tough and we're not afraid to [play hard]."

Metress said the grit comes from his team's smaller stature and practices where players are encouraged to be physical.

McLucas has an idea of what needs to change if the team wants to get a win-streak going.

"For some reason, we come out cold," he said. "If we could come out [hard] early on, we could win more games."

The Bruins will have chances to even out their record against W.T. Woodson on Jan. 22 and West Springfield on Jan. 26.