T.C. Williams pulls away from West Potomac in fourth quarter. 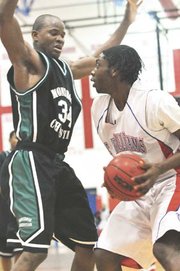 T.C. Williams boys basketball coach Julian King stood outside the Titans locker room Saturday night and discussed the 21-point beating his team had just received courtesy of national-power Montrose Christian. While the final had long been displayed on the Garden scoreboards, King said the game’s outcome, in terms of the Titans’ season, would be determined three days later when T.C. Williams hosted West Potomac.

While the Titans’ win-loss record is impressive — 8-2 after the Montrose defeat — the Titans struggled with consistency early in the season. The team lacked a sense of urgency, figuring everything would be OK by game’s end. Hopefully, King thought, the lopsided loss would motivate his team during its following game.

On Tuesday, T.C. Williams defeated West Potomac 62-52. The Titans improved to 9-2, 7-0 in the Patriot District and still haven’t lost a district game since the 2004-05 season. But it wasn’t good enough for King. T.C. Williams got off to a slow start and led by only four in the closing minutes of the contest before eventually pulling away. Essentially, the Titans did exactly what King did not want them to do.

A win is a win, right? Not this time.

"Just our lack of energy and motivation after a 21-point loss at home in front of a large crowd; it’s just amazing to me that we didn’t come out [and even if we were] making mistakes, [we were making them] going 100 mph," King said. "We’re just lackadaisical with everything and assume we’re always going to pull it out at the end. It’s not going to work like that [all the time]."

T.C. WILLIAMS LED by one at halftime and trailed 30-29 when Keevyn Hankins scored for West Potomac early in the third quarter. The Titans outscored the Wolverines 18-8 during the period, including an 11-0 run, and appeared to gain control. But West Potomac battled back and twice pulled to within four on baskets by Martez Redfearn. Leading 53-49 with two minutes to play, the Titans scored nine of the game’s final 12 points to secure the win.

T.C. Williams post Billy Rowland scored 10 of his team-high 19 points in the fourth quarter. He was 8-of-9 from the free-throw line in the period and threw down a two-handed dunk.

"It’s not the win that we wanted," Rowland said. "… We didn’t come out with the intensity that we should have had coming off a loss like [the one to Montrose] in our home building."

The Titans forced 21 turnovers, but also turned the ball over 21 times. Rowland scored 19 points and Ryan Yates had 12, but no other Titan finished in double figures — a problem King is hoping will be solved by the emergence of a consistent No. 3 scorer. Daquan Kerman scored eight points for the Titans and Tayron Chambers and Tyrell Sitton each finished with five.

"This T.C. team isn’t more athletic than anybody else," King said. "At the end [of Tuesday’s game] when we got a few of those turnovers, it was because we were in position. If we were just that good athletically, then I could sit down a lot. I wouldn’t have to give out as much instruction. But we’re just not overly talented. … Guys that we have that are athletic, they’re inexperienced. We’re just a different type of team."

Redfearn led West Potomac with 19 points and sharpshooting point guard Daryl Copeland finished with 15, including a pair of 3-pointers.

Head coach David Houston III said the Wolverines wanted to put defensive pressure on Yates and Rowland while moving the ball around and finding quality shots on the offensive end. West Potomac played well enough to give itself a chance in the fourth quarter, but made too many mistakes to overcome.

"[Our players] followed the game plan … we just turned the ball over too many times," Houston said. "[T.C. Williams] caused them. It’s not like we just threw the ball out of bounds on our own. They’re a good team, but I thought we played well enough, outside of those turnovers.

"… We wanted to win. There are no moral victories out of this. We came here to win, flat out. Last year, we came in here [and] we played them, same guys, and we lost by [31 points]. A year later, we came in here and we had them on the ropes. … The only thing I’ll take out of it is we’ll see them again."

Next up for the Titans is a trip to Georgia for the Atlanta National Invitational Showcase. T.C. Williams will depart Thursday and play games Friday and Saturday. On Friday the Titans face Thomas Jefferson from New York (7:30 p.m.), and on Saturday they take on Centennial from Georgia (7 p.m.).

When asked if the Titans need a loss to an opponent less talented than a national power to get their attention, King pointed out that had already happened.

"We lost to Hayfield" in our season opener, King said. "It just so happened that they’re not in our district this year. But they’re a Northern Region team and a team we had beaten the last four years. … That’s not the way we wanted to open our season. If that didn’t motivate you, what will?"