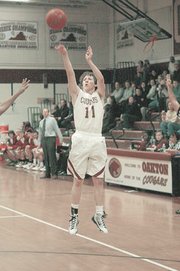 Andrew Daniels, a senior captain for the Cougars, scored 21 points versus Lee on Saturday night.

While Dave Brooks has brought a new mindset to the Oakton High boys’ basketball team during his first season as head coach, he indicated there is still plenty of room for improvement.

“I want to keep improving and make sure we’re playing our best basketball at district tournament time,” said Brooks, who this past offseason was hired to take over an Oakton program that struggled through a 3-19 record last year. “I knew that there was talent here. For whatever reason, that talent didn’t mesh [a year ago].”

Oakton, following a 77-75 non-district home loss to Lee High this past Saturday night, Jan. 22, stood at 9-7 overall, a vast improvement from last year. In Concorde District play, the Cougars entered this week 2-3. While Oakton is hardly a Northern Region power, it is clearly a better team than last year’s edition. Brooks has stressed team work and defense.

“I want to make sure I get the right talent on the basketball court, that we have the right defensive schemes and that we play hard as a team,” said Brooks, who grew up in Long Island, N.Y. “I want to try and utilize my personnel and try to take advantage of the players’ [talent] we have. We try to look to the hot hands as much as possible.”

Oakton’s leading scorer this season has been senior small forward Andrew Daniels, who is averaging 16 points per game. Lately, Daniels has been a particularly effective scorer. He netted 21 points in the loss versus the Lancers on Saturday – a game that was originally scheduled to be played in December before snow forced it to be postponed. In an 84-72 district overtime loss at Centreville earlier last week on Jan. 19, the 6-foot-1 inch Daniels scored 30 points. He tallied 23 in Oakton’s 60-56 district home win over Westfield last Friday night.

“He can score in a variety of ways – off of screens, out on the wing and around the top of the key,” said Brooks. “He has the ability to put the ball on the deck and get all the way to the basket. His [shooting] extends to three-point range as well.”

Oakton has also received good scoring contributions from junior guard Steele Shemeld, who is putting up 13 points per game. Shemeld scored 12 points in both the Lee and Westfield games over the weekend.

“He has really shot the ball well behind the three-point line,” said Brooks, of the shooting guard. “Teams are now respecting his shot and coming out to guard him. He’s stepping up and hitting the 15-footer against them.”

Against the Bulldogs, he did not score through three quarters before breaking through for all of his points in the fourth quarter as Oakton outscored Westfield, 22-13, in that final stanza of a comeback win.

“He knocked down a couple of 15 to 18 footers and hit a big three-pointer,” said Brooks, of Shemeld’s outstanding fourth quarter scoring surge. “He’s a very confident player and a confident shooter.”

&lt;b&gt;OAKTON&lt;/b&gt; has received good play off the bench from senior center Nick Koutris, an All-Region offensive lineman for the Cougars’ football team this past fall who has been a key basketball contributor on the hardwood.

“He does all the little things to help us win,” said Brooks, recalling a key, late game offensive foul charge the 6-6 Koutris drew in the Westfield win, as well as a converted free throw he made that clinched the victory with five seconds remaining.

Other key members of the Oakton line-up include power forward David Larson and point guard Kris McNeil, who scored 20 points in the Lee game.

“We’ve been going well this year and have had a real balanced attack,” said Brooks, a George Mason University graduate who served as a Langley High assistant the past four years under head coach and best friend Trevor Hess. “We have a combination of kids who can score from the outside and kids who can go the basket.”

Oakton’s district wins have come over Robinson and Westfield, and its district losses have come to Herndon, Chantilly and Centreville. The Cougars are scheduled to host Herndon this week on Thursday, Jan. 28.