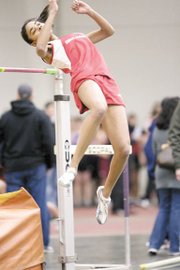 Dominique Graham of McLean finished second in the state in girls' high jump.

The Centreville High boys were the second top team finisher from the Northern Region and finished tied for 12th place overall at last Saturday’s Virginia State AAA Track and Field Championships, held at the Boo Williams Sportsplex in Hampton.

Tenth place Lake Braddock was the only team from the Northern Region to finish better than Centreville (13 points), which finished in a four-way tie with Deep Run (Central Region), Grassfield (Chesapeake) and Stafford (Fredericksburg).

Centreville senior Yazid Zouaimia became a state champion in the boys’ 3200 race, winning with a time of 9 minutes, 15.67 seconds. He finished ahead of Chantilly cross-town rival Christopher Foley, who timed at 9:22.99. It was a terrific one-two state finish for the two outstanding local athletes.

Another Northern Region runner, Oakton’s Andrew McCullen, took fourth place in the 3200, giving the region three of the top four runners in that event.

A week earlier at regionals, Zouaimia took first place in the 1000 event while Foley was third.

But at states, Zouaimia did not compete in the 1000, but reserved his strength instead for both the 3200 and his anchor position on the 4x800 relay event. And it paid off big time with his first place run in the 3200.

In the 4x800, the Centreville boys finished in sixth place. The Wildcats’ foursome was made up of Robert Kelly, Joey Hannah, Mattson Heiner and Zouaimia. The Chantilly boys’ 4x800 team, the region champions, finished in 12th place at states. The Chargers’ team was made up of Matt Cumpian, Sean McGorty, Eric Rolfe and Sam Tucker. Mohamed Labor-Koroma, who had run the final leg in Chantilly’s first place 4x800 at regionals, did not run in the event at states. But Labor-Koroma did race in the boys’ 500 event, and excelled with a solid fifth place finish.

&lt;b&gt;ON THE GIRLS’ SIDE&lt;/b&gt; at states, Lake Braddock (11th), Robinson (12th) and West Springfield (13th) were the highest finishing teams from the Northern Region. Other Northern Region teams to finish in the top half of the 50 team field included West Potomac (18th) and McLean (tied for 22nd).

In girls’ triple jump, Oakton’s Alex Straton earned a sixth place finish and was also 10th in the 300.

At the Northern Region Championships on Feb. 20 at George Mason University, the South Lakes boys’ team captured the team title with 72 points, ahead of second place Langley (54).

Adrian Vaughn of South Lakes won the 300 race and was second in the 500. His teammate, Muhammad Yasin, was fourth in the 500. Sean Price won both the long jump and triple jumps for the Seahawks.

South Lakes won the 4x400 relay. The Seahawks’ foursome was made up of Yasin, Armando Drain, Moore and Vaughn. South Lakes’ 4x800 relay team of Jacob Grundahl, Daniel O’Malley, Sam Boone and Will Sickenberger was fourth.

For the Saxons, Alex Maybury was third in both the 300 and the 55 hurdles. The Langley 4x200 relay team of Maybury, Robert Bennett, Peter Sanson and Thomas Robinson was second overall. Robinson was fifth in the 55 race.

Herndon’s Carina Peter took first in the 55 dash. South Lakes’ Val Moyer was fifth place in the 1000 race. Also for the Seahawks, Kyannah Calhoun was fifth in the 300, one place ahead of McLean’s Ayom Izegbu.

Oakton’s Alex Straton was second in both the 300 and long jump events, and third in the 55. Lanie Smith was eighth in the 3200. Also for the Cougars, Meghan Jean-Baptiste captured first in the triple jump, while getting fifth in the 55-hurdles and sixth in high jump. Oakton’s Jennifer Markin was third in pole vault.

Langley’s Mary Fouse finished third in the 3200, and Saxon teammate Courteney West was sixth in the same event.