A Pathway for Today’s Heroine
Votes

A Pathway for Today’s Heroine 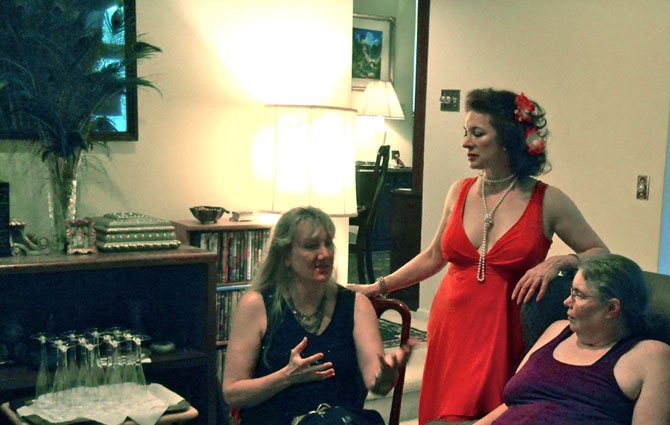 Kim Murray, Alianna Maren (standing), and Katherine Hanna discuss some of the challenges facing women today. Hanna was the primary editor, and contributed to the book. Photo by Lori Baker.

Last week, McLean author, Alianna Maren’s living room was filled with fascinating women. There were old friends, and new friends, several of whom edited or contributed to her recent book, "Unveiling: The Inner Journey."

The women gathered in her home, on a wooded and peaceful neck of McLean, to celebrate one year of the book’s publishing. Each guest had a unique background, and a special reason for being there. Among them were authors, dancers, a women’s organizational consultant and life coach, and a spiritual teacher, just to name a few. Each had an opinion of the book’s message, and each articulated the need for such a book in today’s world.

GROWING UP, Maren was drawn to martial arts as a path toward what she had not yet identified as the heroine’s quest. Though she studied martial arts for years, it was not long before she realized that martial arts, in many ways, is a more masculine pathway; more of a hero’s journey. Feeling that something was still missing, she was finally introduced to middle-eastern dance, often called belly dancing. The ancient dance form spoke to her, and pointed her toward the heroine’s pathway that she was seeking.

"What Alianna is putting out there is current," said friend and book contributor, Kim Murray. "It’s also ancient. The message is what was encouraged for males, but not necessarily encouraged for females. If parents and society planted the seeds for little girls to know that they are going to have very unique journeys that are not always going to be easy, they would be better prepared to embrace those journeys. To not be afraid, not run away or find somebody to save them."

Maren’s book, heavy with research findings, references four archetypes identified by authors, Dr. Toni Grant, and Antonia Wolff. They are the Amazon, the Mother, the Courtesan, and the Madonna. Women typically play each of these roles at some time in their lives. The Amazon, for instance, embraces challenge to reach goals, pursues independence, and "fights fiercely on behalf of those who need our assistance."

"Largely we can all claim some amazon strengths," Maren said. "We all know our nurturing role. We just can’t escape our own biology. And part of our growth is to claim our spiritual aspect, our prayerful selves and our playful selves.

THAT WHOLE IDEA of being a courtesan, now translates from being something for men, into finding pleasure and play for our own happiness and health."

Clinical psychologist and author, Nicole Cutts, called Maren’s book very intimate. "Like Alianna was talking to me. I could hear her voice. It made it fun and easy to read. But you could tell how much research went into it. I really was impressed by that."

Maren hopes that after reading the book, readers will start listening to and prioritizing themselves. As for her future plans, she hinted that there might be another book in the works. In the meantime, she invites readers to visit her blog, http://theunveilingjourney.blogspot.com, or her website www.theunveilingjourney.com.