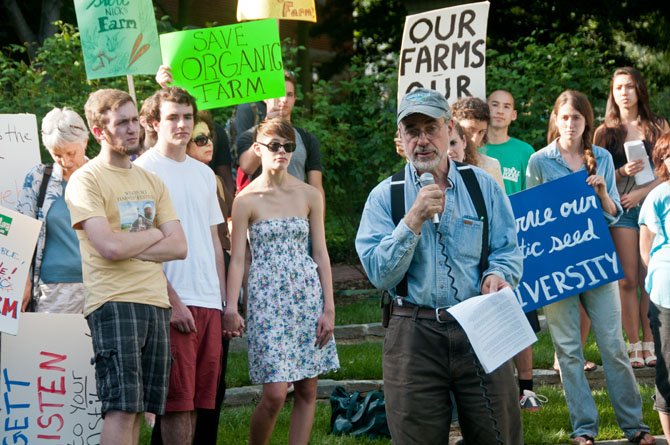 Nick Maravell, who has been running the organic farm for 32 years, gives the closing comments to his supporters. Harvey Levine

Potomac — Editor’s note: As the Almanac headed to press on Tuesday, the effects of two court proceedings and the governor’s opinion cast uncertainty over county plans to take control of the Brickyard organic farm on Aug. 16 to turn it into soccer fields. This story was written Tuesday before the conclusion of the hearings.

“I believe we are about to make a big mistake in destroying acres of a productive organic farmland and its solids which could be a priceless asset to the education, health and well-being of generations of Montgomery students. …

I understand that these issues are the subject of litigation, and it is not my intent to express any view on the legal merits of the case. However, on policy grounds, there are significant and compelling reasons to preserve this farm for the benefit of the children of Montgomery County.

Brickyard Educational Farm aims to teach students about local and sustainable food and agriculture, and to show them how the food they eat is grown. The farm’s vision is to supply organic produce for school lunches, and to offer field trips, a Beginning Farmer Program, apprenticeships, and internships to students in neighboring schools. The initiatives offered at Mr. Maravell’s organic farm directly align with our State’s priorities, including our Agricultural Literacy Program and our Farm to School Program. Furthermore, the farm helps the county meet the requirements of its ‘No Child Left Inside’ mandate.

As a nation we are doing an awful job at nutrition in our schools. Sadly, in Maryland we are not doing much better. Rather than moving our State backwards through this destructive policy choice, Montgomery County can and should be a leader. The vital connection between our farms, the food we eat, and our children’s future has never been more important than it is right now.

“I negotiated the license agreement with Nick’s Organic Farm. Mr. Nicholas Maravell, on behalf of Nick’s Organic Farm, requested that the first optional Term expire on Aug. 15, 2012, a date which he said gave him sufficient time to harvest his summer crop.

“The County and MSI must have access to the site on Aug. 16 so that we may perform critical path activities, including soil, topographic and environmental studies as well as installation of four groundwater monitoring wells. The County and MSI must perform these studies in order to apply for permits and submit the proposed use of the Brickyard Road Site to the [Park and Planning Commission] for review under the mandatory referral statute. If we cannot continue with these critical path activities, there will be an unacceptable delay in onset of site development activities. Any such delay will prevent the fields from being ready for play on Sept. 2, 2013. The MSI financial model for this project is based upon play beginning in accordance with the schedule in Sept. 2013.”

“The County and MSI must have access to the site on Aug. 16 so that they may develop the soccer fields for the season that begins on Sept. 2, 2013.

“MSI has expended $60,504.20 for concept planning, design, traffic studies, other studies and project management in connection with this project.

“MSI intends to develop at the site at least two superior quality soccer fields for immediate use, with the potential for a third field. If MSI is forced to incur a growing season delay in the seeding of the fields, it will cause a year delay in the opportunity for kids to play on those fields. The cost of replacement on an annual basis for those play opportunities is in the range of $200,100 to $300,150.”

“I believe we are about to make a big mistake,” O’Malley wrote.

Organic farmer Nick Maravell is supposed to vacate the land he has farmed the last 32 years on Wednesday, Aug. 15, so the county can move forward with its plans to build “superior quality” soccer fields on Brickyard Road.

The county is scheduled to take possession on Thursday, Aug. 16.

“I understand that these issues are the subject of litigation, and it is not my intent to express any view on the legal merits of the case. However, on policy grounds, there are significant and compelling reasons to preserve this farm for the benefit of the children of Montgomery County,” O’Malley wrote, in a letter to the Executive and school board president dated Sunday, Aug. 12, 2012.

“I believe we are about to make a big mistake.”

Maravell asked the Circuit Court of Montgomery County at a hearing on Tuesday to permit him to stay on the land while legal challenges are pending.

“Nick’s Organic Farm has no right to be on the property” according to Patrick L. Clancy and Kristen M. Koger, attorneys for the Board of Education.

“Interfering with the County Board’s ability to have its own land available for use as a school site constitutes irreparable harm,” according to Clancy and Koger. “Petitioner’s request runs counter to the fundamental principle of freedom of contract.”

MARAVELL HAS LEASED the property from the school system since 1980, operating an organic farm. In March 2011, despite no public involvement and just a few day’s notice, the Montgomery County School Board voted to turn the land over to the county for a public-private partnership for soccer fields.

The Maryland Department of Agriculture certifies the farm as organic, which it has been since 1986. Maravell seeks to maintain “status-quo” while legal issues are decided by the courts.

But the County said it already extended Maravell’s lease until August.

His claims for relief are “ultimately nonsensical,” according to Marc P. Hansen, county attorney, and Clifford L. Royalty, chief, Division of Zoning, Land Use and Economic Development.

“The Petitioners are seeking to void the only legal document (the license agreement) that has allowed Nick’s Organic Farm to remain on the premises,” they wrote. “The Petitioners need an injunction against themselves.”

Both Maravell and the Brickyard Coalition asked for an appeal or Judicial Review of last week’s State Board of Education ruling. The state board ruled that Montgomery County’s Board of Education did not violate law when voting to turn the land over to the county during a March 2011 meeting.

IN HIS LETTER, O’Malley suggested the mission of the newly established Brickyard Road Educational Farm shows promise for what the farm could mean for students.

“Rather than moving our State backwards through this destructive policy choice, Montgomery County can and should be a leader,” said O’Malley. “The vital connection between our farms, the food we eat, and our children’s future has never been more important than it is right now.”

On Monday, Aug. 6, Leggett announced a new program to support farmers that emphasizes the need for farmers to have long-term access to their land.

“Our region has an ever-increasing demand for sustainable, local food — food that nourishes our children, reclaims our environment and provides meaning employment within the County,” said Leggett. “The New Farmer Pilot Project will give new farmers a head start by matching them with private land owners and a support network that enables them to grow their businesses.”

But whatever the court system ultimately decides, the County School Board made itself clear in court on Tuesday.

“The County Board of Education has determined that it does not wish to lease its land to Nick’s Organic Farm,” according to Clancy and Koger.

Save Nick’s Organic Farm scheduled a farm tour, a dinner, and a rally for Wednesday, Aug. 15, on what could be the last night of the organic farm.