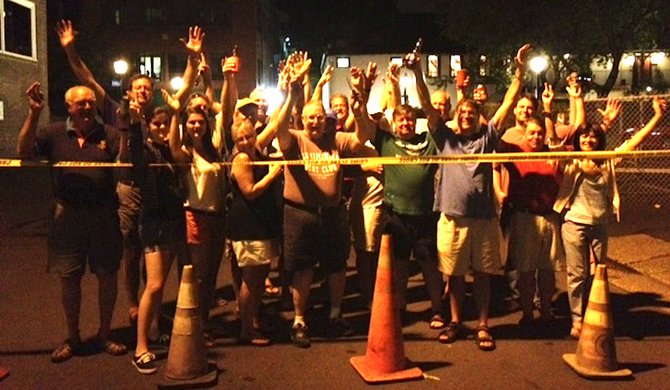 Last weekend, members of the Old Dominion Boat Club staged an annual ritual that’s something of a cross between a tailgating party and Occupy Wall Street. Every year, members shut down a section of the Strand for several hours to make sure everybody knows that the land is officially Boat Club property. The yearly affirmation usually goes without much notice.

Since City Council members narrowly approved a controversial small-area plan to allow hotels on the waterfront and increase density at three sites slated for redevelopment, the land-use change has been cast into an every expanding legal web. City officials have been successful in fending off two challenges. The first was several months ago, when a Circuit Court judge dismissed a challenge to the notice of a Planning Commission hearing. Another victory came late last week, when two Old Town neighbors withdrew a challenge to Planning Director Faroll Hamer’s determination against accepting an appeal to her rejection of a protest petition the day of the public hearing on the waterfront plan.

“The city’s position is so strong that the plaintiffs are voluntarily dismissing it,” said City Attorney James Banks. “How can I not feel anything but good about that?”

THE COMING WEEKS and months will see a number of legal challenges working their way through the court system just as the campaign season heats up and voters select members of the next City Council. In early September, the Circuit Court will hear motions in a case brought by the Old Dominion Boat Club challenging the city’s decision to lease part of Wales Alley to a restaurant. It’s a case that’s already been through the Circuit Court and the Virginia Supreme Court, which remanded the case back to the lower court to determine whether or not the city has authority to deprive Old Dominion the right to use the public alley.

“Remanding this case to the Circuit Court without deciding that legal issue is a waste of judicial resources,” wrote Chief Judge Cynthia Kisner in a stinging dissent.

Meanwhile, opponents of the waterfront plan are trying to appeal a separate Circuit Court decision in the Virginia Supreme Court. Earlier this year, Circuit Court Judge Jim Clark dismissed a suit brought by a group of Old Town women who have come to be known as the “Iron Ladies.” Their lawyer tried to appeal Hamer’s ruling rejecting the protest petition in January, an effort that city leaders dismissed because they said City Hall was not “open for business” during a public hearing. Later this year, the Iron Ladies will get 10 minutes in Richmond before the justices to determine whether or not the high court wants to hear the case.

“There’s not a lot of case law out there on this issue,” said Roy Shannon, the attorney representing the Iron Ladies. “And the case law that’s out there isn’t necessarily all that clear cut.”

AS THE LEGAL process drags into next year, voters may have the power to make a final determination. Although the waterfront plan will not be on the ballot, candidates for the City Council have taken positions for and against the proposal. And because the trial date in the city’s appeal of the Board of Zoning Appeals is set for March, voters have an opportunity to change the composition of the council before the legal challenges have been fully resolved.

“I think that the November election will be a litmus test on whether Alexandrians are comfortable with the level of development that’s being pushed in various places around the city,” said Boyd Walker, one of the leading opponents of the plan. “What the city leaders are asking for us on the waterfront is to allow the development now and then wait 15 or 20 years for the amenities.”

Walker was one of a handful of candidates who opposed the waterfront plan during the hotly contested Democratic primary in June. Most of those candidates lost, although then-Del. Adam Ebbin (D-44) was able to beat one of the waterfront plan’s strongest supporters, Councilman Rob Krupicka, in a Democratic primary for the Virginia State Senate after speaking out against the proposal. That means that the November general election may end up being more important to the outcome of the waterfront plan that the web of lawsuits currently working their way through the court system.

“We can all play guestimates on who’s going to win,” said Dennis Auld, founder of Waterfront For All. “There’s a possibility that a supermajority for those who support the plan may not occur. I don’t know which way the election is going to go.”