"By midnight, there must have been three thousand helpless men lying in the hay. All night long we made compresses and slings and bound up and wet wounds when we could get water…" —From the writings of Clara Barton, after tending to the wounded in the battles of Second Manassas and Ox Hill in late August, 1862.

For the first time, the stories of the soldiers and the courageous woman who nursed them, Clara Barton, will be told through reenactments, exhibits and demonstrations during a special exhibit at the historic Fairfax Station Railroad Museum beginning Aug. 25. The event is part of a 10-day county-wide commemoration of the 150th anniversary of the American Civil War. 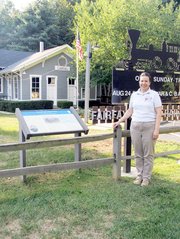 Jenee Lindner, chair of the 10-day county-wide commemoration of the 150th anniversary of the American Civil War, in front of the Fairfax Station Railroad Museum, the site of many of the events.

"This is an exciting event for the community," said Jenee Lindner, chair of the event and a Clara Barton re-enactor. "Now we take mass evacuations for granted, but what was important was this was the first time we used the railroad for mass disaster relief in an organized fashion."

Lindner said the event will begin at 10 a.m. on Saturday, Aug. 25 with an opening ceremony at the Fairfax Station Railroad Museum during which Fairfax County Board of Supervisors Chairman Sharon Bulova (D-at Large) will welcome the public to the event. During the weekend event, there will be costumed Civil War re-enactments as well as artifacts and displays inside the museum from the Civil War highlighting the medical evacuation of the wounded during the Civil War and on-loan museum artifacts from Clara Barton, founder of the American Red Cross.

Lindner said she and Ron Beavers, co-chair of the event, have been working with the National Building Museum and the National Park Service to obtain historical artifacts for the exhibit, including Clara Barton’s bodice, "The Record of the Federal Dead"—a book prepared by Barton which contains the names of 488 soldiers who died in hospitals during the American Civil War—and some of Barton’s handwritten letters discussing her hospital work.

"After the second battle of Manassas, Clara Barton nursed the wounded for three days and nights as heavy rains fell and doctors operated at St. Mary’s Church and the station, two of the few dry places where doctors could perform amputations," Lindner said.

THE SECOND BATTLE of Bull Run was fought Aug. 28–30, 1862. It was the culmination of an offensive campaign waged by Confederate Gen. Robert E. Lee's Army of Northern Virginia against Union Maj. Gen. John Pope's Army of Virginia, and a battle of a much larger scale than the First Battle of Bull Run fought in 1861 on the same ground. 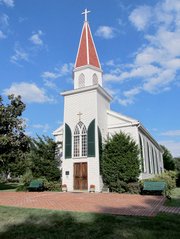 As the Union Army withdrew before Lee’s troops, a field hospital was established along a hillside between St. Mary’s Catholic Church and the Fairfax Railroad station. Although 20,000 Confederate soldiers had begun the push toward Fairfax Station, Clara Barton, her volunteers and the doctors remained until the 3,000 wounded were evacuated. As a result of her experiences at Fairfax Station, Barton would later create a plan for a civilian society to care for war wounded, which became the American Red Cross.

"Her dedication and achievements were remarkable," Lindner said.

Beavers said the entire 10-day exhibition is designed to give residents a unique opportunity to experience the significance and impact of the American Civil War. It remains the deadliest war in American history, resulting in the deaths of an estimated 750,000 soldiers and an undetermined number of civilian casualties.

He said many of the exhibits and events underscore the famous words of President Abraham Lincoln that "a house divided against itself cannot stand."

*On Aug. 29 from 5 to 7 p.m. at Fairfax Station Railroad Museum, there will be a historical marker dedication during which Supervisor Pat Herrity (R-Springfield) will be the guest speaker.

*On Sept. 1, the 150th anniversary of the Battle of Ox Hill will be commemorated at Ox Hill Battlefield Park from 10 a.m. to 5 p.m., 4134 West Ox Road in Fairfax. Admission is free. The event will include flag presentations, children’s' activities and crafts, artillery and infantry demonstrations, period medical displays, Civil War re-enactors and special guest speakers. For more information, go to www.fairfaxcount.gov/parks/oxhill/ 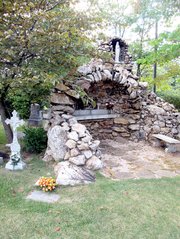 The grotto at the historic cemetery at St. Mary of Sorrows Catholic Church, where there will be a candlelight vigil on Sunday, Sept. 2 at 8 p.m. as part of the 150th anniversary commemoration events of the American Civil War.

*On Sept. 2, there will be a candlelight vigil at the cemetery of St. Mary of Sorrows Catholic Church, 5612 Ox Road in Fairfax Station, where many of the wounded were laid out on the hillside and on pews taken from the church, Lindner said. For more information, go to www.honorfairfaxcemeteries.org.

"Our committee has been working so hard on this event since April. We could not have done this without our interns and volunteers," Lindner said. Committee members include: Alexandra Bradshaw, James Esson, Matthew Barnes, Ashley Beavers, Jeff Mitulla, Michael Chinworth and Joan Rogers, President of the Friends of Fairfax Station.