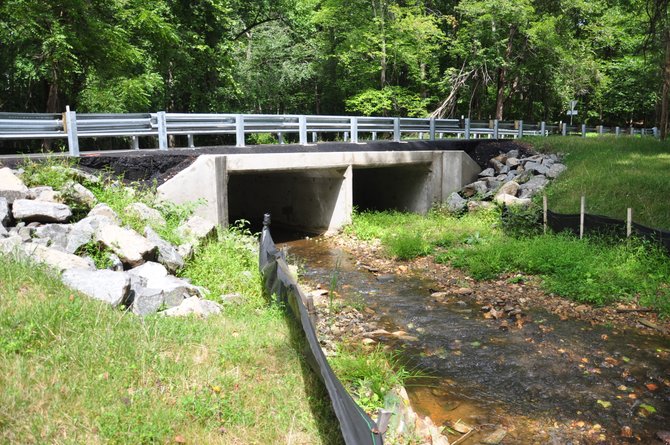 A temporary bridge and box culvert built on Beach Mill Road over Nichols Run. VDOT had proposed to close and build the new, permanent bridge starting this month, but moved it back to June 2013. Photo by Alex McVeigh.

Great Falls — The Virginia Department of Transportation has postponed the scheduled replacement of the bridge over Nichols Run on Beach Mill Road. Originally scheduled to close from Aug. 13 to December, construction has been pushed back, and will start after the 2012-13 school year lets out.

"If we wait until next summer we can begin work as soon as school lets out and re-open the bridge by Labor Day," said VDOT Project Engineer Nicholas Roper.

The detour with the bridge closed is about six miles, routing traffic to Springvale Road to Leesburg Pike to Utterback Store Road.

The bridge was scheduled for years to be replaced by VDOT, due to its overall poor condition. According to VDOT engineers, it scored a 43.8 on a scale from zero (the worst) to 100 (the best) on a Federal Highway Administration rating system.

During storms last September it was destroyed, and a temporary bridge and box culvert were installed. The construction for next year will replace those with a design VDOT hopes will last 50-75 years.

According to VDOT numbers, the bridge sees about 1,700 car trips per day. Many residents say they are concerned that the traffic burden on surrounding roads will be too much .

"That sounds like a whole lot of trips that won’t go away, they’ll just be shifted to roads like Springvale and Utterback Store, not to mention Georgetown Pike," said Jon Khaled, who lives on Utterback Store Road. "It’s not like Great Falls is teeming with cross streets and shortcuts. When you take out one avenue, it’s bound to wreak havoc with the others, where traffic isn’t ideal at current levels."

Eric Knudsen, chair of the Great Falls Citizens Association’s transportation committee, said that VDOT’s engineers are in agreement that the current bridge, while completely safe for use, is not designed nor does it fit the requirements for a long-term replacement.

The bridge on Leigh Mill Road, which was designed to a similar standard as the proposed Beach Mill Road bridge when it was replaced in 2010, held up over last September’s storms, even as water levels rose above it.

According to VDOT, the project will be incorporated into the Route 7 widening, and will be timed so that work is not being done at Beach Mill and at Georgetown Pike during the same time.

More information about the project can be found at http://www.virginiadot.org/projects/northernvirginia/beach_mill_road_bridge_replacement.asp.