A fresh performing arts series will be opening with "Just Between Us: A Piano, A Mic and A Memory" featuring local performer Marilyn Hausfeld and pianist Alex Rybeck. This will be the premier performance before the two head up to the New York City Theater District to perform at the "Don't Tell Mama" cabaret club in the Big Apple. 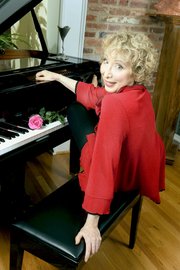 Marilyn Hausfeld will perform in ‘Just between Us’ at the Jewish Community Center in Fairfax Sept. 8-9.

According to Jeff Dannick, executive director of the Jewish Community Center (JCCNV) of Northern Virginia, "Just Between Us" is the first of the expansion of performing arts that "will feature entertaining and diverse programs which will engage people of all generations and backgrounds."

The performing arts series will "incorporate professional theatre, music and dance...making the JCCNV a destination for both our members and the general public," said Dan Kirsch, JCCNV cultural arts director.

Hausfeld, who recently completed a fellowship at the Yale International Cabaret Conference, described her cabaret "as an intimate musical conversation with an audience. It is communicating on a personal level through song and storytelling." The performance will be music, song and patter to "celebrate life" taking place in a warm supper club atmosphere set-up for 100 patrons.

"While I love the challenge of creating a role on stage, cabaret is such an honest one-on-one relationship. I also love the chance to remove that fourth wall—to actually see the audience and establish rapport—to look into the eyes of the people who are watching you," said Hausfeld.

"The audience can expect to laugh, to be moved and to feel connected. I think an audience can easily relate to much of what I sing and talk about... growing up, learning who you are, falling in love, creating a family, dealing with new dreams and not being afraid to pursue your passions," she added.

She described her award-winning, piano accompanist Alex Rybeck as "the most talented pianist and musical director I have ever had the pleasure of working with." He studied with Bernstein and Sondheim to mention a few. He worked with the Calloway sisters, Faith Prince, Tommy Tune and other Broadway stars.

"Cabaret allows me to be an actor, a storyteller, a singer and most importantly—myself. I can take my life experiences and create an entertaining piece of theater that other people can identify with," said Hausfeld. "I may be a grandmother, but I am constantly discovering new ways to create."