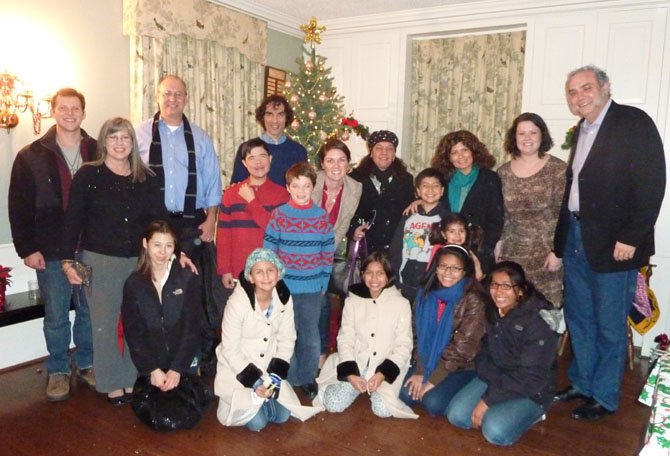 Elliot Bales, right, joins pediatric cancer patients and their families following a special Nov. 29 performance of “A Christmas Carol” at The Little Theatre of Alexandria. Photo by Jeanne Theismann.

It’s a tale as old as time: The miserly Ebeneezer Scrooge is ethically and emotionally transformed after being haunted by visits from the Ghosts of Christmas Past, Present and Yet to Come in the Charles Dickens classic “A Christmas Carol,” now playing at The Little Theatre of Alexandria.

First published in December of 1843, LTA has updated the traditional version of the Victorian play with an original adaptation by director Rachel Hubbard that debuted Nov. 29 to children and families from the Georgetown Hospital Pediatric Oncology Center.

“We’re so excited to be here tonight,” said Melanie Downie, whose 8-year-old son Brian plays one of the Cratchit children. “It’s a dream come true for Brian.”

Brian Downie was diagnosed at 13 months with histiocytosis, a rare form of bone cancer. With 16 bone tumors discovered at diagnosis, he has had five relapses and undergone chemotherapy treatment for six years for more than 50 tumors.

“He’s in remission and doing well now,” said Melanie Downie, who helped arrange for 40 pediatric oncology patients and their families to attend the show that served as a Partners in Arts night fundraiser for the Arlington Soccer Association’s Rowdies Red U16 girls team.

“We raised over $1,000,” said 15-year-old Charlotte Alberts, whose mother Rachel is a longtime producer at LTA. “Our teams all have to do one fundraiser a year so we thought this would be a good idea.”

Typical of many school fundraisers, tickets were sold to generous family members who would not be able to attend the show. Rather than see the tickets go unused, Melanie Downie asked if she could distribute the tickets to the cancer patients and their families.

“It’s such a thrill to combine our two worlds like this,” Melanie Downie said. “Brian was always entertaining everyone in the hospital but he had never done any theater before auditioning for the show. We had no idea what stage right or stage left was but then he got a call back and here we are.”

“I’ve always loved Dickens and wanted to do something different to commemorate his 200th birthday,” said Hubbard, who is making her LTA directorial debut. “All of the good that radiates from this show is because of the cast. They have worked so hard and are so dedicated and the enthusiasm of Brian and all the children is infectious.”

Taking on the central role of Scrooge is Mount Vernon resident and theater veteran Elliot Bales. Bales gives a passionate performance, holding the audience spellbound as he deftly brings a tenderness to the transformation of the despised businessman.

Mark Lee Adams, who trained with Judi Dench in London, plays Dickens with aplomb with LTA favorite Larry Grey as Mr. Fezziwig. The entire cast is remarkably talented with costumes and staging that bring the Victorian streets of London to life.

“This is a magical evening, not just for us but for all the families here,” Melanie Downie said. “For any family who has a child with cancer, you enjoy life to the fullest day by day.”