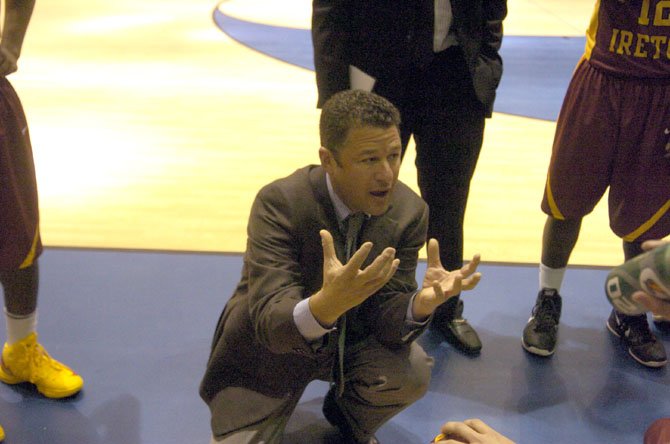 Bishop Ireton head boys’ basketball coach Neil Berkman talks to the Cardinals during a game against Fairfax on Dec. 3. Photo by Craig Sterbutzel. 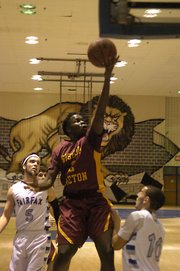 Bishop Ireton junior Patrick Moseh scored a team-high 18 points during a 73-53 victory against Fairfax on Dec. 3.

Fairfax — The Bishop Ireton boys’ basketball team opened its 2012-13 season on Dec. 1 with a 19-point win against Episcopal, a program that last season went 23-4 and finished VISAA state runner-up.

Facing Fairfax, Bishop Ireton fell behind by as many as seven points in the first half and trailed, 40-36, with 5:20 remaining in the third quarter. But the Cardinals would respond as a Patrick Moseh jumper sparked a 25-4 run and Bishop Ireton pulled away for a 73-53 victory on Dec. 3 at Fairfax High School.

“I thought Fairfax played very well,” fourth-year Ireton head coach Neil Berkman said. “I thought we were more talented than they [were]. They were better coached than we were, their players played harder than we did and we gave them a great chance to win the game and the score was much closer than the margin indicated. …

“I thought we had a huge letdown from our game on Saturday. We had no energy, we had no emotion, our communication was atrocious, we got out-rebounded tonight by a much, much smaller team … and we got out-toughed. We got out-played and hats off to Fairfax.”

While Ireton lacked energy early, the Cardinals improved to 2-0 in what they’re hoping is a breakout season. Ireton has finished near the bottom of the Washington Catholic Athletic Conference standings for years, but the Cardinals feature an experienced core that received lots of playing time during last year’s eighth-place conference finish (10 teams).

“We’ve been the doormat of that league for so long. We have our whole core returning. [We] finished [eighth] last year in the conference, so our goal is top five this year, for sure, and playing at American University in the semifinals at the end of the year.”

“From a team standpoint, [our goal is to] surprise the conference,” junior forward Dan Noe said. “We’ve been the doormat of that league for so long. We have our whole core returning. [We] finished [eighth] last year in the conference, so our goal is top five this year for sure and playing at American University in the semifinals at the end of the year.” 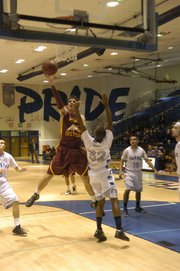 Bishop Ireton forward Dan Noe scored 10 of his 15 points in the third quarter during a 20-point win against Fairfax on Dec. 3.

Noe, who transferred from W.T. Woodson to Bishop Ireton after his freshman season, was a key contributor in Ireton’s second-half turnaround against Fairfax, scoring 10 of his 15 points in the third quarter. After a Fairfax bucket cut Ireton’s lead to 46-44, Noe scored six straight points for the Cardinals to spark a 15-0 run.

“Danny is one of the toughest kids on our team,” Berkman said. “He’s a team captain. We expect tremendous leadership from him, which he provides. He’s just solid as a rock. You always know what you’re going to get from Dan: it’s toughness, it’s leadership, it’s all the right things. Dan Noe is one of the reasons I coach.”

“Patrick should be one of our best players this year,” Berkman said. “He’s usually an energy guy off the glass. He’s very difficult to guard because he’s very physical. He can take the ball off the bounce, he can also shoot, he can score, he’s very skilled and he’s one of our better defenders.”

“For my team goal, I just really want to make a push and surprise everybody,” Moseh said, “because we really put in the work [during] the offseason.”