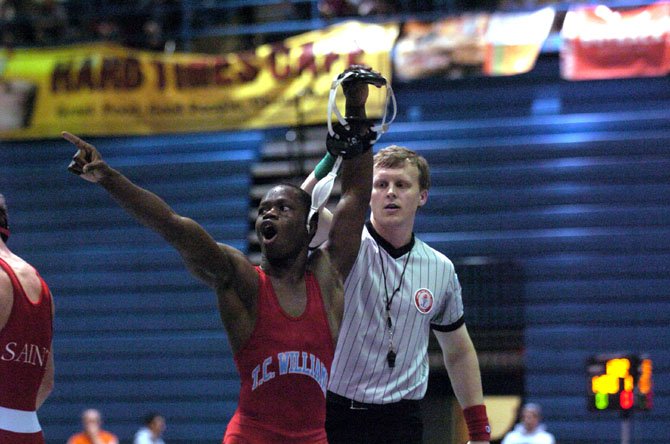 Fairfax — After a blow to the right ear left him hearing a ringing sound, T.C. Williams wrestler Ibrahim Bunduka used a timeout to compose himself. The senior trailed St. Stephen’s & St. Agnes grappler Shaw Whitley, 4-3, in the third period of the 126-pound title match at the 2012 FinalAutoPrice.Com NOVA Classic and needed to make something happen.

“Coach [Chris Marshall] always told us never give up when you’re in a close match,” Bunduka said afterward. “I was just going through my head when we were doing drills where you have 30 seconds left [and] you’ve got to score quick …”

Bunduka tied the score with an escape, took the lead with a takedown and held on for an 8-5 decision and the 126-pound tournament championship on Dec. 8 at Fairfax High School.

“That’s a testament to how hard his work has been up into this season and the last two years,” Marshall said. “He’s got a [full] gas tank and he doesn’t know when to quit.”