Selling the Idea of Reston
Votes

Selling the Idea of Reston

Panel discusses the marketing and progress of early Reston. 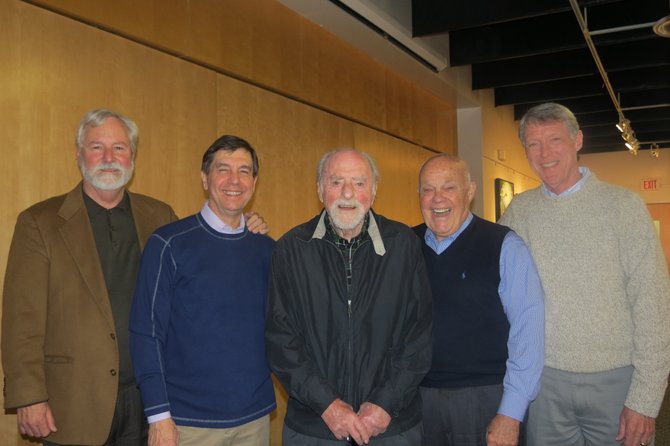 The panel, all of whom were heavily involved in Reston's original development and efforts, with the town's founder, Robert Simon. From left, John Sidall, Chuck Veatch, Robert Simon, Peter McCandless and Houston Park. Photo by Jennifer Benitz/The Connection

By By Jennifer Benitz/The Connection

On Thursday, Nov. 29, community members piled into the Reston Community Center to listen to a panel discuss the marketing and progress of early Reston as a part of a series of discussions relating to the town’s 50th anniversary. With an audience of about 50 members, including Reston Founder Robert Simon, the discussion was in full-force after opening statements were made by Chuck Veatch at 7 p.m.

The panel consisted of four speakers: Chuck Veatch, Peter McCandless, Houston Park and John Sidall. The speakers, most of whom were part of the ongoing efforts during Reston’s early days, discussed the challenges and successes of starting out in the early 60s.

John Sidall speaks in front of the audience on Nov. 29.

“This was a tremendous opportunity to meet people from all over the world,” said McCandless, who arrived in Reston in 1963 as the town’s 25th employer and a member of the town’s original Public Relations team, following the opening statements. “The joy of Reston is its universality.”

Houston Park stands in front of the audience speaking on his recounts of the early days in Reston.

RESTON WAS FOUNDED soon after Robert Simon purchased 7,000 acres of land in 1961 to build a town he had envisioned—a town that emphasized a welcoming sense of community where families and business could call home for generations to come. While the first couple years proved to be a very difficult start for Simon Enterprises, growth and stability began to prosper in the late 1970s and early 1980s, particularly after gaining access to Dulles Toll Road, which provided a direct link between Interstate-495 and Reston—a major breakthrough.

Peter McCandless speaks about his experiences as a part of Reston's original Public Relations efforts.

With 2,500 residents by 1967, growth was slow. From 1965-1967, real estate consultants faced criticism for Reston, a town often coined with the stereotype of “Volvo and Birkenstocks” people, as Veatch said. “The early days were testy and things were tough,” said Veatch, who came to Reston in 1964 and joined the development efforts from the beginning, fresh out of the University of Virginia. “It was very expensive getting Reston started, but we had a unique plan.”

By January 1969, Park, who managed graphic design and advertising services, implemented a target goal of moving in 1,000 families into Reston per year. By the end of the year, 1,139 families had moved in—the first year the goal was met. The community continued to grow and with time, Reston’s PR team was able to slowly but surely sell the concept of a community. It hit major success after opening a Bloomingdale’s House in the early 70s and again in the early 80s. Reston also had the benefits of open space, nature and a lake nearby to draw residents in.

Chuck Veatch gives the opening statements at the Reston Community Center on Nov. 29.

“People had to pay a little more per square foot in Reston, but there was more open space,” said Sidall. “Not a lot of people understood that. We lived here, we did as we advertised. As the market grew more people came. For the people who understood Reston’s value, it was easy to sell.”

Sidall was the first outsider to join Reston’s original team, joining in 1972 from Richmond as an external consultant. “They were extraordinary people following extraordinary things.”

WITH A FOCUS on diversity of product, Reston’s developers and Public Relations team showcased more diversity in housing types than most nearby areas, which gradually worked in their favor as the market expanded.

“As a family community, we were young, most in their 30s to 40s with young kids and on their way up,” said Park. “We were lucky that we struck a nerve with young families; that they knew [Reston] is how we should live, how a community should be.”

The panel concluded the discussion just after 8 p.m., leaving ample time for questions and comments from audience members. One audience member in particular, Simon, was all smiles after a night of reminiscing with long-time colleagues.

“People appreciate community,” said Simon, in regards to its success. “We are still working on the future of Reston.”