Planning For Aging in McLean
Votes

Planning For Aging in McLean 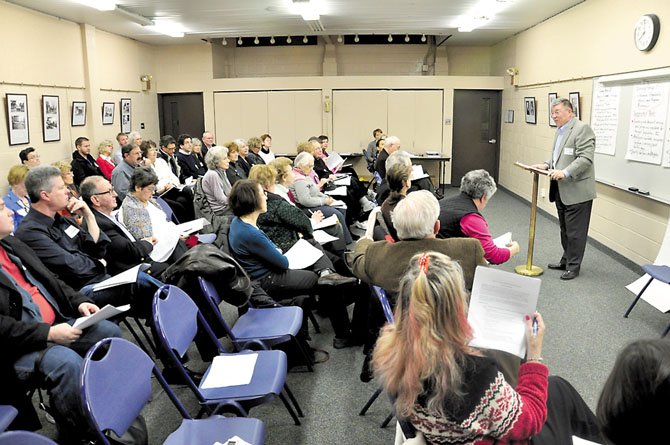 Jerry Hopkins speaks to a group of people interested in helping plan for aging in the community at the McLean Community Center Monday, Jan. 30. Photo by Alex McVeigh.

McLean — The McLean Community Center hosted a follow up meeting Monday, Jan. 30 to Supervisor John Foust’s (D-Dranesville) forum last October that addressed how the community can be supportive of its aging population. The Oct. 15 forum presented several speakers who spoke on their experience dealing with senior care, as well as various models of assisted living communities.

"While this technically might be step two or three, it’s probably more like step one when it comes to discussing what we’re going to do in McLean for our aging community," said Jerry Hopkins, who served as the moderator in October, and led the Monday meeting. "We’ve had the forum, we took our surveys, collected our information, but until tonight we haven’t had this many people together in a room to discuss what can actually be done."

Judy Seiff examines a list of priorities when it comes for planning for services for people aging in McLean at the McLean Community Center Monday, Jan. 30.

MORE THAN 40 PEOPLE attended the meeting, and they spent part of it in groups figuring out strategies. While groups such as the Greater McLean Chamber of Commerce, the McLean Community Center and the McLean Citizens Association helped put on the forum, the people who attended Monday’s event came to help make the ideas presented there a reality.

"This is a group that came together to explore the need for enhanced services for senior citizens, individuals with disabilities and for their caregivers, because they’re a very important part," said Victor Kimm, president of Share, a McLean-based nonprofit, and another one of the groups involved in the process.

Judy Seiff, who spoke at the October panel, says her time in McLean has been so pleasant that she would like to stay as she ages.

"I came here in my twenties because of my husband’s job with the federal government and have lived here for over four decades," she said. "I want to age in place, and I became convinced that if we want to have the kind of community that we can live in, we have to start planning now."

Patti Green Roth said one of the group’s primary objectives should be to exhaustively examine all options for seniors.

"We need to be vetting and looking at every single resource that’s available and being offered," she said. "Because we can’t be recommending things or sending people to places that haven’t been properly vetted, if we do that, we’re not helping."

Many people attended the meeting because they themselves are aging, or they care for someone who is. Mary Ann Torregrossa, who has lived in McLean since 1958, said she came to the meeting to find out strategies for taking care of her mother, who lives with her and is 92.

"I want to be able to take care of my mother when she becomes disabled, because probably at some point things will become more difficult," she said. "I’m here to get ideas and put them to work."

AFTER THE MEETING, attendees began signing up for various working groups and taking on different responsibilities as the initiative moves forward. Seiff says attracting a wide variety of skill sets and interests would be key for the group going forward.

"We wanted to draw as many strand of the community together as we could, and we’ve got a good start," she said.

More information about the group can be found on Facebook by searching "Aging in McLean."