Stacey Jones has been engaged in dance and theatre pretty much her whole life. She sang in school choruses and performed in musical theatre in high school. And then, she majored in East Asian studies and Japanese language at Duke University. 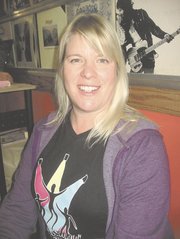 If Asian studies at Duke suppressed her passion for musical theatre, there would be no story about Jones today or a children’s theatre training program called Stage Presence. Instead, Jones directed a student-run musical at Duke. "That’s where I got the bug," Jones said.

"I love being on the stage hearing the applause," said Jones. "But once I directed I thought, ‘this is where I belong.’"

Jones married a military man, and they moved to Heidelberg, Germany. She and her husband started a family and, when the Heidelberg Lions drill team needed a choreographer, Jones stepped in.

"That was a lot of fun," said Jones. "It was the first time I put dancing and kids together."

Her experiences with the theatre department at Duke inspired a passion for musical theatre. So much so, that when she returned to the United States and moved to Vienna 13 years ago, she volunteered to hold theatre classes for students at her child’s school, Flint Hill Elementary School. She ran the volunteer afterschool theatre program for five years, until the family moved to a new home in Vienna that was in a different school district. Recognizing Jones’ feel for kids and theatre, her family and friends encouraged her to create her own company. She did. Jones opened Stage Presence in 2008.

"If what you’re learning is your passion, it’s not a chore. It’s a delight."

CHILDREN AUDITION for placement and no child is rejected. Stage Presence’s season runs for five months, beginning in February, and culminating with a student production in late spring. Participants practice in four-hour blocks two times a week. Practice is at the Universal Unitarian Church in Oakton on Hunter Mill Road. The practice room, said Jones, has "lots of windows opening to the woods behind," and includes use of piano. 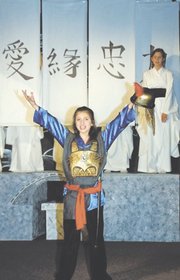 A staff of three that Jones considers indispensable supports the program. Jacky Spalding is theatre choreographer, Anna Nurmi is the musical director and Phil Charlwood is set designer and master carpenter. Nurmi and Charlwood volunteer their skills.

Season fees per student cost $350, but Jones emphasizes she is flexible about payment plans. She doesn’t want money to be a reason children lose out on the experience.

She refers to her program as "all kid-run." The students, in fourth through sixth grades, do almost everything a theatre crew and cast would do. "That’s the whole point of Stage Presence," said Jones. "It’s to illuminate a child’s creativity through dramatic arts. It’s not just about being on-stage. It’s about teamwork, respect for each other and for the teachers, and cooperation.

"I tell the kids, ‘when you walk through these doors, we’re all on the same level.’"

Stage Presence, in business after the family’s move to new schools, continued to pull in students whose families knew of her from Flint Hill.

Paige Cilluffo, an Oakton eighth-grader at Thoreau Middle School, stars as Millie in the school’s spring musical production, "Thoroughly Modern Millie." She carries with her, even now, what she learned as a student with Stage Presence. "To this day, I keep the advice and tips in-mind that they gave me," said Paige. "Whenever I’m on-stage, I still hear their voices in my head."

James Madison High School senior Andrew Barat echoed Cilluffo’s sentiment. Barat’s own one-act play will be presented at his high school in mid-February, and immediately following, he starts production on the school’s spring musical. He was a fourth-grader himself when he saw Jones’ first production at Flint Hill, calling it "amazing."

"My experiences with Miss Jones taught me the basics," said Barat, considering pursuing a double-major that includes theatre next year when he enters the University of Virginia. "Even in high school, you need to remember the basics."

Jones, feeling "more compelled" to get more experience under her belt, entered George Mason University in 2009 and graduated from there in 2011, with a Bachelor of Arts degree in theatre.

It was a challenging period for Jones. She had three children, was operating Stage Presence and going to school full-time. "If what you’re learning is your passion, it’s not a chore. It’s a delight."

Her relationship with George Mason University continues today. No longer is Stage Presence producing shows in a school gym. Stage Presence rents out Harris Theatre at GMU for its end-of-season production.

STAGE PRESENCE runs on-site afterschool programs in the area, as well as its centerpiece spring season.

Not all of Jones’ students want to be onstage. Some prefer to be away from the limelight, learning technical skills. Some begin training with Stage Presence as introverts, and end the season with outgoing self-confidence. Many of Jones’ students are already in dance, and many go on to participate in theatre in middle school and high school.

She said her dream is to open a year-round children’s theatre in which Stage Presence could do a diversity of productions. Then, she said, she would extend the age range for participation.

"I never sell the kids short," said Jones. "We teach them things they can take with them the rest of their lives."