Column: Is Breast Cancer Vaccine on the Horizon?
Votes

Column: Is Breast Cancer Vaccine on the Horizon?

I hope I have to change the direction of my medical practice one day. Because that would mean breast cancer is a thing of the past. As a surgeon who specializes in breast cancer, there is nothing I wish more than its elimination from the lives of my patients, future patients, and anyone who has experienced its impact.

The race to cure cancer is currently taking many different routes. One of the interesting and potentially simplest may come in the form of a vaccine, which stimulates the body's immune system to protect itself from cancer cells. During the last two years, there have been significant strides in the development of cancer vaccines. Doctors are already administering two FDA approved vaccines that target viruses to prevent liver and cervical cancers (as well as another to

treat certain types of metastatic prostate cancer). Many other cancer vaccines are in clinical trials, including one for an early form of breast cancer. 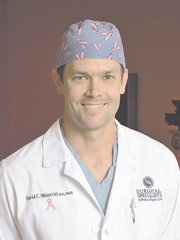 David C. Weintritt, MD, FACS is a board certified general surgeon and director of the Breast Care Institute at Inova Mount Vernon Hospital.

In May 2010, researchers at the Cleveland Clinic announced they had developed a vaccine that targeted the formation of breast cancer. In the study, which was published in the journal Nature Medicine, mice that were genetically geared to develop cancer were vaccinated. Half of the mice

None of the mice that received ±-lactalbumin developed breast cancer, while all of the other mice did.

Their team, led by Vincent Tuohy, PhD, focused on ±-lactalbumin because it is a protein that is found in the majority of breast cancers. It is not found in healthy women, except during lactation, so it became the target of the vaccine. The strategy would be to vaccinate women over 40 — when breast cancer risk begins to increase and pregnancy becomes less likely. For younger women with a heightened risk of breast cancer, the vaccine may be an option to consider instead of prophylactic mastectomy as long as they didn't plan to breastfeed.

In a separate study, researchers at the University of Pennsylvania are conducting trials for a vaccine for ductal carcinoma in situ (DCIS), an early form of breast cancer. The vaccine is made partly from a patient's own white blood cells with the goal of preventing a cancer recurrence. A 47-year-old mother of two from Pennsylvania is one of the first women in the world to receive the vaccine in the DCIS study.

And yet another study being conducted by the National Cancer Institute has shown some promising results with metastatic breast and ovarian cancers.

While there is no definitive solution yet, there will be a breakthrough one day that stops breast cancer and many other forms of cancer in their tracks. Until that time, we will fight the good fight with cutting edge approaches for predicting, diagnosing and treating breast cancer. I have

a universal goal when approaching patients with breast cancer to create a plan that maximally impacts the cancer but preserves the patient's sense of wellbeing. A breast cancer vaccine would be an amazing addition to the options that are currently available.