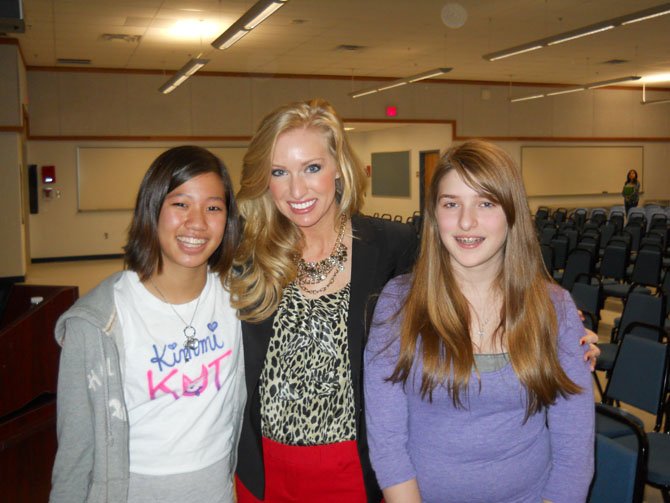 A little more than ten years ago, Elizabeth Crot was the typical middle school student. She had all the ingredients of middle school life; lots of school work, friends, and, as Crot pointed out, doubts and insecurities. Elizabeth Crot was recently crowned Miss Virginia, and now spends her time talking to groups of middle school students across the state. "When I was your age I was picked on for having a crooked nose…and for caring about school. Never in a million years did I think when I was your age that I would be here in front of you."

Crot, who was crowned Miss Virginia over the summer, shared her message last Thursday with students from Longfellow Middle School. And as a young woman not far from their age, she made a strong connection with the seventh and eighth graders there. Crot covered topics that are sometimes discussed, sometimes avoided by middle school students, including alcohol abuse, bullying, stereotyping, and physical and emotional abuse.

Elizabeth Crot, Miss Virginia, emphasized the importance of being yourself.

The school invited Crot to visit in order to kick off its anti-bullying week, which begins on Feb. 13.

LONGFELLOW has several initiatives to empower the students, and to give them a vehicle to address bullying. School principal, Carole Kihm, said that their bullying report system, an anonymous system for reporting issues, has given the students a sense of power and ownership. The school also passes out what they call "Lancer bucks," for positive behavior. Kihm saw a girl trip last week and drop her books, and when a boy stepped in to help her pick them up, Kihm gave him a "Lancer buck." Five Lancer bucks can be traded in for a cookie from the cafeteria.

When Kihm started at Longfellow four years ago, there were 220 referrals to the office in one semester. A year later, after implementing some of these initiatives, the referrals were down to 22 in a semester. "We have very few now," Kihm said. "The emphasis is on the positive, and trying to do the right thing, and everybody is on board, including the kids."

Crot, in her message to the students, pointed out that although bullying has been around for a long time, the arena has changed. When her parents were students, bullying occurred on the playground. Now, especially with the popularity of Facebook, bullying often occurs online. "Bullies are hiding behind a computer screen, and it’s easier," she said. She, like many others, has been a victim of online bullying. In fact, not long after being crowned Miss Virginia this summer, she had a rude remark posted on her Facebook page.

She shared her method for dealing with online bullying. Her advice to "stop, block, and tell," has a familiar ring, and, Crot is hoping, similar success. She coached the students to stop when they see something offensive online. There is a temptation to want to respond online, but putting a stop to it is the best tactic, she said. If it continues, she suggested blocking the person who is behind the comments. And finally, to tell somebody that they trust.

Crot told the students that everybody is embarrassed about something, and told them that she was always self-conscious about her nose. But she challenged them to be strong. "Being strong is staring at your insecurities in the face, and standing up to them. It’s not letting your insecurities hold you back," she said.

Crot, who is sponsored by the Virginia Department of Alcoholic Beverage Control (ABC), discussed the topic of alcohol abuse with the students. As minors under the age of 21, Crot told them, their brains are not yet fully developed, which makes drinking a double hazard. It is not only illegal at their age, but it is dangerous. "As a recent graduate from JMU (James Madison University), I will never forget the amount of binge drinking I saw," she said. She told of a girl in her dorm that had to be rushed to the hospital with alcohol poisoning, and a boy that broke his leg after falling off of a low roof while drunk. She also told the audience about her good friend who was killed instantly in a car accident after being hit by a drunk driver.

She reminded the students that alcohol use under the age of 21 will not only affect your body and your mind. Additionally, "It can close doors to the future," including getting a driver’s license, getting into college, or getting a job.


HER ADVICE to combat bullying, the pressures of drinking, and just the general social pressures that come with being a teenager or young adult, is to "find what you like to do. Your life will get better," she told them. "There are so many people that care about you, and you guys will find what you love to do, and then nothing else matters." For Crot, that was singing. And she shared her soprano version of the operatic piece, "Sempre Libera."

After her presentation, seventh grader, Kim Schwadron said, "She told us how important it is to believe in yourself and not really give up. It’s good because a lot of kids don’t take bullying seriously. And I think people need to realize that that’s actually really important."

"She was really cool and down to earth," added Emily Swatt. "It’s important to be yourself and don’t let anybody stand in your way."