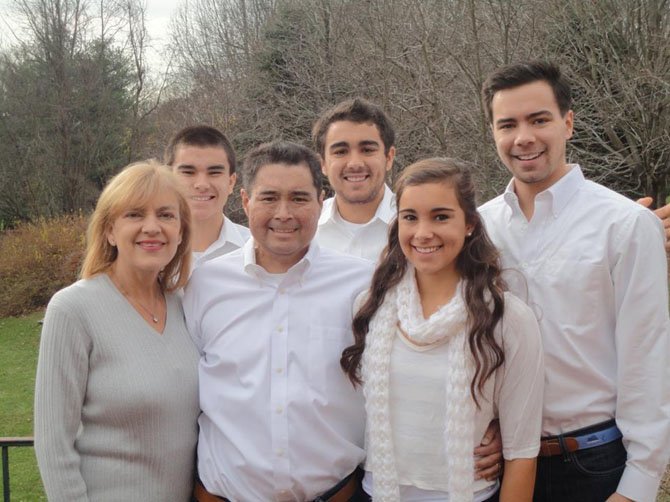 By By Jean T. Jianos

Great Falls resident Eric Sanson knew that he was at risk for a heart attack because of his family history, so twenty years ago, he was proactive in establishing a relationship with Northern Virginia cardiologist, Dr. Anne E. Summers of Cardiac Care Associates. Dr. Summers’ stated philosophy is "to listen and handle with care," which is exactly what she did with Sanson. He credits Dr. Summers’ "sharp ear" while listening to his heart through her stethoscope and identifying the fact that his heart was swelling. After some tests, Sanson was diagnosed with idiopathic cardiomyopathy, or heart muscle disease with no known cause, resulting in deterioration of the function of the actual heart muscle. Because Sanson had no signs or symptoms, the disease would have been hard to detect at such an early stage, but Sanson took the initiative to reduce his risk factors by consulting with a cardiologist.

"What is truly miraculous is the way in which the whole community of Great Falls, McLean and beyond, has put their arms around us."

SANSON’S GOAL from there on out was to keep his heart pumping to the best of its ability despite the swelling and weakening of the heart muscle. While Sanson could not prevent cardiomyopathy, he could reduce his chance of heart failure by taking as many steps as possible to control risk factors that would make his heart work harder than it was able. He did not have the coronary artery disease that was part of his family medical history. He had always been athletic, playing a variety of sports as a young man, including collegiate football while a student at Whitworth University in Spokane, Wash. Growing up in San Francisco, his physical activity was not limited to organized sports, but extended to fishing in the San Francisco Bay and other outdoor activities. He also took medication as prescribed to reduce high cholesterol and to otherwise maintain heart function. And with regard to trying to control such things as high blood pressure with good nutrition, as well as getting enough vitamins and minerals, Sanson’s wife Donna says that their four children "were three steps ahead of us." She continues, "Kids today are more knowledgeable and have the opportunity to eat healthier. They are amazingly conscious of the food that they eat." Both Sansons feel that the new generation has benefited from the heart healthy nutrition promoted by educators and coaches.

Irregular heartbeats were creating extra work for Sanson’s heart, further weakening his heart muscle, so eight years ago he received the first of two implantable cardioverter defibrillators ("ICD"). After the second ICD, Sanson underwent open-heart, Cardio-Maze surgery in November of 2010, hoping that surgically creating a maze-like pattern of scar tissue, which does not conduct electrical activity, would block the abnormal electrical signals causing Sanson’s irregular heartbeat. After that, it was determined that Sanson would need a heart transplant. Given his age and the steps he had taken to maintain his overall health, his wife Donna says, "Eric was an ideal candidate," so he was put on the transplant list in February of 2011. Sanson underwent another open-heart surgery in March, 2011 to implant a mechanical heart pump (left ventricular assist device, or "LVAD"), which helped blood circulate through Sanson’s heart and allowed him to live at home with his family while waiting. In July of 2011, a donated heart became available, although Sanson does not remember taking the call due to some memory loss after the transplant.

While acknowledging the medical miracles that kept her husband’s heart pumping and which have given him a new, healthy heart, Donna Sanson says that, "what is truly miraculous is the way in which the whole community of Great Falls, McLean and beyond, has put their arms around us."

THE SANSONS made the decision to stay in Great Falls after they sold their home, and have relocated to a rental home that is more economical and user-friendly for Eric in his continuing recovery. On moving day, members of the community, including entire families and groups of children, were on hand to clean and unpack. Another example of the way in which the community has rallied around her family, which Donna says, has revealed to her a connection to community that thrives in and around Great Falls as much as she ever would experience in her native Oklahoma, surrounded by extended family and multi-generational friends, neighbors and business associates.