Langley Comes Up Big for Marshes 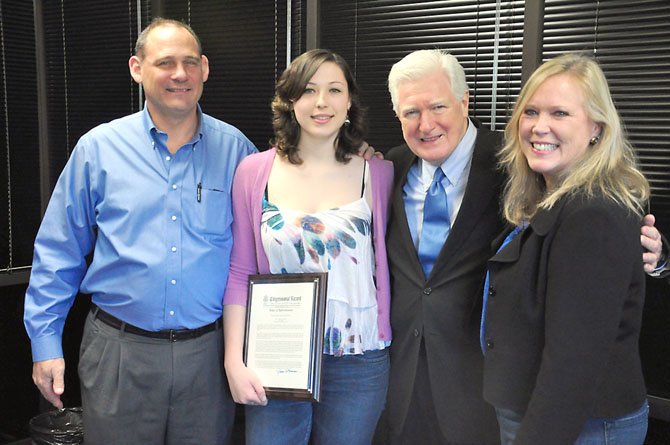 From left, John Marsh, his daughter Maureen, Rep. Jim Moran (D-8) and Carol Phelan-Marsh. Maureen, a junior at Langley High School, survived a rare form of bone cancer, and despite doctor’s predictions, she was able to recover from surgeries and chemotherapy to play volleyball again. Moran recognized the Marshes and the Langley community Monday, Feb. 13. Photo by Alex McVeigh.

McLean — When Langley High School volleyball player Maureen Marsh began experiencing knee pain her freshman year, doctors told her it was just growing pains. But the pain persisted, and trainers eventually found a small lump on her knee. A bone biopsy on Oct. 15, 2009 confirmed something else: a rare form of bone cancer known as osteosarcoma.

Marsh began chemotherapy in November 2009, and in January 2010 she had extensive surgery.

"It’s a rare form of cancer, there’s only about 35 people every year that get it. As a parent, your first reaction is to look up information on the Internet, but the information we were finding was 10 years old," said John Marsh, Maureen’s father. "They replaced her right knee joint and removed five inches of her femur, while also adding a 12-inch titanium rod." 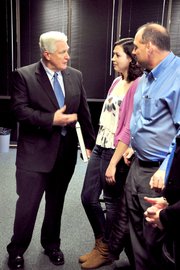 From left, Rep. Jim Moran (D-8), Langley High School junior Maureen Marsh and her father John. Maureen Marsh survived a rare form of bone cancer, with help from the Langley community, and they were recognized at the school Monday, Feb. 13.

Maureen Marsh, now a junior, went through eight months of chemotherapy, and doctors told her she would never play volleyball again. But with the support of her family and the Langley community, she has returned to court, and has excelled in school as well, getting straight A’s last semester.

To commemorate the occasion, Rep. Jim Moran (D-8) stopped by the school Monday for a brief ceremony.

"I was so impressed by [Maureen] and also the support group you had, your parents, your coach and trainer," Moran said. "This is so above and beyond, a lot of people would just go about their business and not make that extra effort, but they did make that effort."

Moran also entered a statement into the Congressional Record, honoring the school’s collective effort to devote themselves to Maureen Marsh’s recovery.

"It’s a wonderful testament to the love and caring of a true community," he said. "The team at Langley understood Maureen’s wishes and gave her everything she needed during a battle that this young warrior conquered, defying the odds and doctor’s prognostications."

Moran also spoke from experience, as his daughter was diagnosed as an infant with a brain tumor that required a major operation.

Maureen Marsh’s family said they were overwhelmed with the support given from Langley, and by Moran’s recognition of their efforts.

"We emailed his office thinking maybe we’d get a letter, but within minutes we got a phone call saying he would come and recognize what the people here have done," said Carol Phelan-Marsh, Maureen’s mother. "We have such a debt of gratitude to this school."