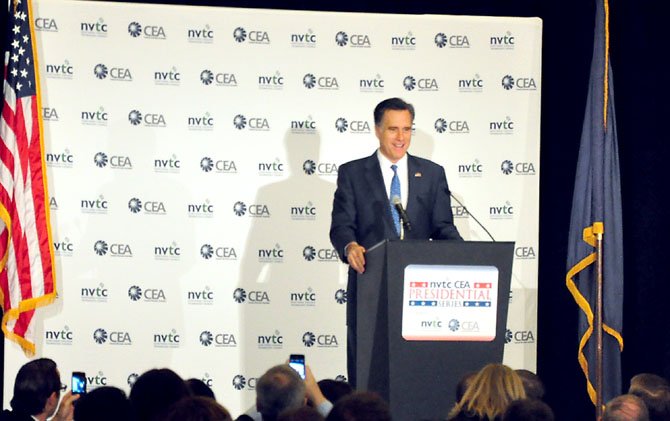 Reston — The Northern Virginia Technology Council welcomed Republican presidential hopeful Mitt Romney Friday, Feb. 10 at the Hyatt Regency Reston. The former Massachusetts governor spoke about his experiences in the world of business and the importance of allowing innovation to flourish.

"What are we going to do to encourage innovation to reside here? We cannot be number 40 or 41 on the table of innovative environments. We will lose innovation, and it will go elsewhere," he said. "I look at what’s happening and say we’re going to have to make dramatic, bold, creative change to how our nation interacts with our government, or else we’re going to find ourselves eclipsed by other nations."

Romney advocated for a change in the tax structure that would encourage business ventures.

"We right now have corporate taxes that are the highest in the world. This doesn’t make a lot of sense if you’re trying to encourage people to take risks," he said. "I’d bring those rates down dramatically."

He also called for government regulators to take a different viewpoint when it comes to their job, that they should see it as their responsibility to encourage the private sector, as opposed to killing all potential risk.

"If you’ve been in an enterprise, and the culture is ‘if you’re wrong mister, you’re going to lose your job,’ you’re never going to see innovation," he said. "We have a government that basically says there is basically never any risk whatsoever."

He pointed to the California-based company Solyndra as an example of what has gone wrong. In 2009, it received more than $500 million in support from the government.

"I’m not going to be critical because Solyndra went out of business, any venture capitalist knows you make terrible mistakes from time to time. But when they put $500 million in Solyndra, they thought they were encouraging solar energy in this country, but they did the opposite," he said. "When they put their $500 million into Solyndra, the other 100 entrepreneurs in this country working on solar energy just lost any potential to get capital."

Virginia Governor Bob McDonnell was at the event, and he introduced Romney. He praised the former governor’s variety of experience, saying Romney has "a profound understanding of the technology community and its importance to the overall prosperity of our nation."

Other attendees at the event said they were similarly impressed by the skill set Romney brings to the table.

"If we tasked headhunters with selecting a president based on relevant management and government experience, financial and budget acumen, leadership and integrity, they would identify Mitt on their own as a leading candidate," said Gary Shapiro, president and CEO of the Consumer Electronics Association.

The event was the NVTC’s latest in its Presidential Series. Former candidate Herman Cain spoke in November.