MoverMoms Celebrate 5 Years of Helping Others 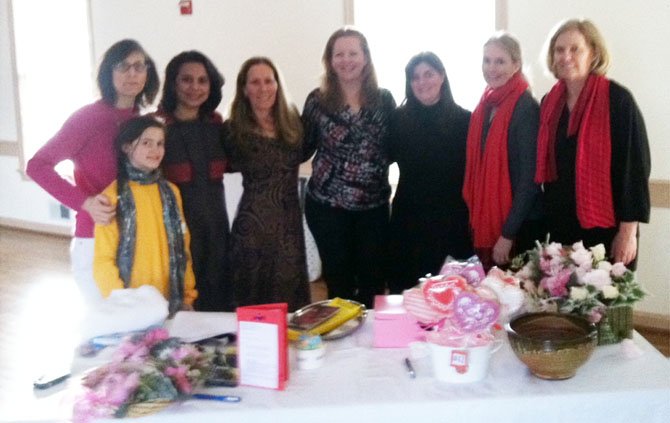 Chief Inspiration Officer Salma Hasan Ali describes the power of MoverMoms this way: "It might seem like it’s a drop in the bucket, but when people collectively do just a little, the bucket suddenly becomes full."

Founded by Rebecca Kahlenberg of Bethesda and Heidi Bumpers of Cabin John five years ago, MoverMoms has burgeoned to a non-profit organization with more than 200 moms who feed the hungry, provide candy for U.S. troops serving overseas, collect trash on Sangamore Road, walk and talk with women in shelters, and travel with their own children to El Salvador to help mothers-to-be and other children — and do a myriad of other volunteer projects.

MoverMoms held its 5th anniversary celebration at the River Falls Clubhouse on Sunday, Feb. 12. The event included remarks by Connie Morella, Catherine Leggett and Ana Sol Gutierrez; Patrice Moerman, a Bethesda guitar instructor who is lead singer of the band "Hot Flash," provided live music. A video displayed the work of this group over the past five years — a chain of events set in motion when Kahlenberg organized a group of moms to serve dinner at the NIH Children’s Inn in 2007. So many moms were eager to join, that Kahlenberg decided to formalize the concept of a group of moms who would perform community service regularly. MoverMoms is now an acronym for "moms who make things happen — and make a positive difference in our community."

One of the highlights of the celebration was the "Be Inspired" silent auction. Most of the auction items were gifts of service, gifts from the heart, or gifts of time donated by MoverMoms’ members or their families. Auction items included knitted scarves and hats, hand-made pottery, floral arrangements, a hand-painted box, private life coaching sessions, swim lessons, guitar instruction and more. Some of the member’s children joined in to offer cat sitting, hand-made cards and a Poms dance instruction session. Traditional items such as gift cards to local shops and restaurants were also up for auction. MoverMom Peg Philleo coordinated the silent auction and raffle items. MoverMom Tricia Russell organized the food for the event that featured an "afternoon tea" theme with tea sandwiches, scones, pastries and cupcakes donated by Georgetown Cupcakes. Whole Foods, a MoverMoms sponsor, donated much of the food.

MoverMoms’ 2012 projects are already in the works. Kahlenberg will depart for El Salvador with her daughter Amanda, 10, and a guide/translator Manuel Umanzor of Silver Spring next week to set up the group’s second international volunteer service trip. Last July, six members with six of their children volunteered at a maternity center and an elementary school in Perquin, one of the poorest parts of the country, near the Honduran border. "We taught nutrition, parenting, yoga and exercise — and even gave them cooking lessons," said Kahlenberg. "We are planning to return this summer."

"The children immediately connected with one another," said Salma Ali. "My son, Zayd was not certain he could contribute, but he taught the children to make paper airplanes, and they had a wonderful time flying them. All the children jumped rope, did crafts and learned pottery with MoverMom Barbara Selter. Our children came away with an understanding of how happy one can be even if they don’t have a lot of resources."

Other projects that MoverMoms are involved in are ‘Walk-On," and "Cupcakes and Conversation." Once a week, they visit a women’s shelter and walk with the women or, in inclement weather, bring cupcakes and discuss current topics with them. They deliver "gently read" magazines to the shelter when they visit. One of MoverMom’s flagship projects was to collect unused Halloween candy for "Treats for Troops." They have continued this initiative along with collection drives for many causes including preparing and serving dinners at homeless shelters and sharing information about other volunteer opportunities.

The group also educates members about global issues and other cultures through their book club, museum outings and other educational group activities and outings.

MoverMoms is currently collecting new and gently used kitchen items such as potholders, kitchen towels, cooking utensils and other small cooking items. Kahlenberg will take these with her next week to El Salvador. Donations can be dropped off at 7101 Loch Lomond Drive, Bethesda, MD 20817.

Information about becoming part of the group is available at its website: www.movermoms.org. Members are free to donate as much or as little time as their schedule allows.