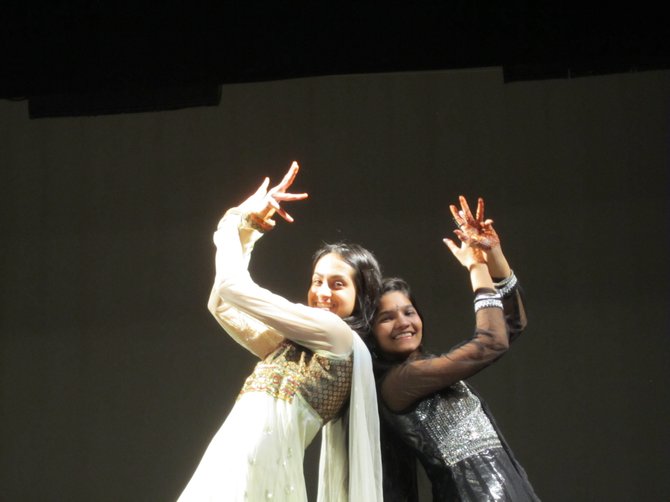 By By Monika Bapna

The dimming lights and the consequent hush that fell over the auditorium at sharply 6:45 p.m. on Wednesday Feb.15 signaled the start of Marshall’s annual International Night.

International Night is an event that celebrates the cultural diversity at Marshall High. With over 20 countries and their cultures showcased, the night offered food, information boards and a variety of cultural performances.

Parent volunteer Cherisse Mungal created tri-fold boards for all of the Caribbean countries represented for the night. In her 4th year as a volunteer, Mungal described the night as a "chance to showcase cultures that won’t normally be recognized."

The size and scope of the event, therefore, mandated the collaboration of teachers, students, clubs and parent volunteers to achieve its large-scale goals.

Teacher participants included a new face of history teacher Sean Rolon who succeeded Matthew Axelrod as in charge of the entertainment for the event.

The logistics of the event were primarily handled by parent volunteers. Sharyn Quirk, Cecilia Watson and Barbara Leiber-Klotz managed various aspects of the night.

Quirk, who was the chair for the event, credited the success of the evening to her fellow volunteers.

"In order for International Night to occur I needed people to take on various roles," she said. "This amazing team and many parent volunteers have prepared a very special evening for the Marshall community."

The performances, which were largely self choreographed and rehearsed, proved to be very diverse, according to Rolon. They included dances like Kathak, a traditional Indian dance done by sophomore Supraja Chattari and a rendition of I Still Call Australia My Home from the musical "The Boy from Oz," by junior Joshua Jones.

The Can Can dance that concluded the event with ear splitting applause was prepared by the members of French Club with the help of French teacher Sylvie Rosenbaum.

"I was very impressed by the Can Can dance," Sophomore Joshna Seelam, who performed many Bollywood numbers at the event, said. "It was apparent that they put a lot of effort in."

Additionally, the International club members who have mainly been in charge of assisting the teachers and parents, volunteered to take on the extra responsibility of advertising the event, club president junior Alisa Chirachaturaphak said.

Parent Susan Pierce, who attended the event with her daughter sophomore Marieka Pierce, called the night a "great success."

According to Pierce, the success stemmed from uniting these diverse cultures through the food, performance and an overall ambiance of fun and learning. "I really hope they continue this next year," she said. "Maybe they can have a professional videographer, and sell come CD’s because these performances were totally worth it."