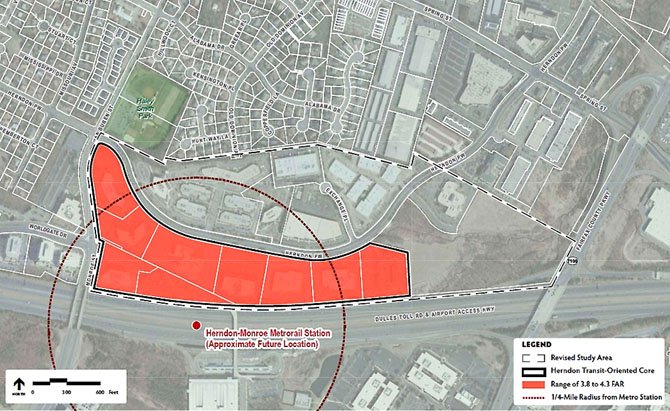 The Herndon Town Council voted Feb. 14 to defer a decision on the proposed Comprehensive Plan Amendment for the area north of the proposed Herndon-Monroe Metrorail station. The council will resume discussion at their Feb. 28 public hearing. Photo Contributed

Herndon — The Herndon Town Council voted Feb. 14 to defer a decision on adoption of the Comprehensive Plan Amendment that would allow for redevelopment of 38 acres between Herndon Parkway and the proposed Herndon-Monroe Metrorail station.

"There’s a lot of information for us to take in, a lot to consider," said Councilmember Grace Wolf, who made the motion to defer. "We’ve heard a lot of public comment and I think we all have an initial sense of where we are, so we don’t need a whole lot more time."

The plan calls for increased density in the study area, which would help increase the town’s tax base in such a way that it is believed will fund the improvements.

Public comments to the town have been mixed on the proposal, with some saying they agreed with the plan and some felt it was being pushed through too fast.

THE TOWN COUNCIL has been debating the plan since their Feb. 7 work session. Councilmember Bill Tirrell said the decision by the council would set parameters that could be adapted as Phase One’s functionality is examined.

"In my opinion, this council needs to set the vision for what we expect to be there, then sit tight for a while. Phase One still has to be built. Phase One is going to change a great number of things around here, and we don’t know what those will be," he said. "We can use all the models we want, but things like traffic patterns, the number of people driving to get on at Wiehle [Avenue Metrorail station, final stop on Phase One] and telecommuting haven’t been addressed yet."

Tirrell also stressed that the Comprehensive Plan Amendment would merely set the vision for development, but not lay down any hard and fast rules.

Councilmember Sheila Olem recalled when she moved to Herndon 20 years ago, hearing that Metro would one day come down the Dulles Toll Road. She said, "Whether we pass this tonight, two weeks from now or a month from now, it doesn’t mean a developer is going to go out there and build something overnight," she said. "And if Phase Two doesn’t happen, then nothing is built. But the middle of the Toll Road is where the Metro will be, and I do believe we’ll get it eventually."

Councilmember Connie Hutchinson said she would like to see ways the consultants can bring down the proposed density.

"I’m personally not crazy about the amount of density we’re talking about," she said. "If there’s anything our consultants can do to figure out that break-even point, we’d like to know the minimum amount of density that would work with certain other trade-offs, with the town picking up more of the costs of improvements, or expanding the area. That’s the type of information I’m looking for over the next few weeks."

Hutchinson also said that the council would not make any decision for the sake of making one, that they planned to do their due diligence.

"This plan is very extensive with lots and lots of details and lots at stake, so I think it’s really important we get this right," she said. "There’s no rush to push something through that we might regret."

THE FEB. 28 PUBLIC HEARING will take place at 7 p.m. at the Ingram Council Chambers, located at 765 Lynn Street. The plan can be found online at www.herndon-va.gov.