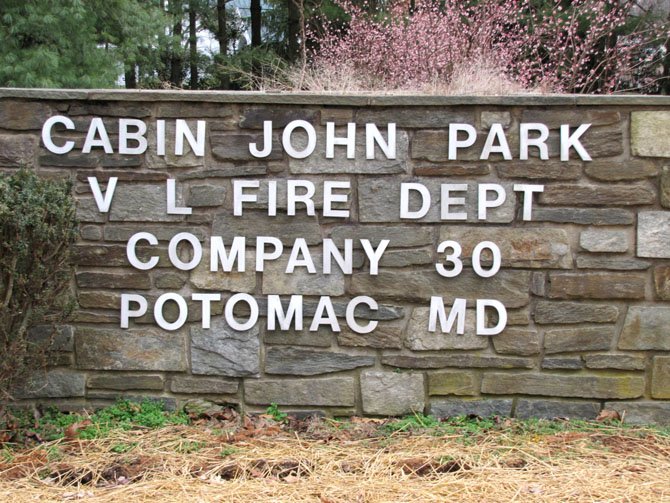 Cabin John Park Volunteer Fire Department, not the county, owns Station 30 on Falls Road. The current CIP will delete any county funding for improvements to the station, which lacks facilities for female firefighters, and CJPVFD will begin fundraising for the multi-million dollar expansion and renovation. Photo by Ken Moore.

Potomac — County Executive Isiah Leggett removed the $7 million renovation and addition project to Cabin John Park Volunteer Fire Department Station No. 30 on Falls Road from his current proposed Capital Improvement Program. What was originally supposed to be a joint project between the county and the Cabin John volunteers is now on hold because of a disagreement over ownership.

Station No. 30 sits on 1.47 acres at 9404 Falls Road, and the building and land are owned by the Cabin John Park Volunteer Fire Department, not the county. The station is one of the smallest in Montgomery County.

The planned project would have modernized the living and support areas of the Falls Road station including facilities for female personnel, replaced building systems and increased gear and equipment storage for rescue boats and other water rescue equipment.

Charles E. Benson and 10 other founding members organized Cabin John Park Volunteer Fire Department on March 19, 1930. The first fire apparatus bought by the department was a Ford Model T pickup truck equipped with a 100-gallon portable pump that was stored in a shed at the corner of MacArthur Boulevard and 77th Street.

The fire department responded to growth of the Potomac area in the 1960s by placing a fire engine in a garage where the present Potomac Veterinarian Hospital now sits. Station No. 30 on Falls Road opened at its present site in 1970.

The volunteer fire department opened its River Road headquarters in 1984, after occupying the corner of MacArthur and Seven Locks since 1932.

Personnel from Station No. 30, both county career and volunteer fire and rescue workers, respond to the Potomac River and Potomac Village as its first due area.

“We have a functional fire and EMS station facility that delivers daily service to the community,” according to County Council documents. “However, the physical plan does present certain routine space and living arrangement challenges for the personnel assigned to this station.”

Tensions between traditional volunteer fire service and the career fire and rescue system run by county government are longstanding. But in this case, the conflict appears to be shifting the costs of needed facilities from county government to the Cabin John Park Volunteer Fire Department.

In January, Chief James Seavey of Cabin John explained some of the challenges facing the new board of directors.

“This board faces many complex major issues before them in the two-year term ahead,” Seavey said. “The need to raise substantial funds for the rebuilding of the Potomac substation will require the full time and attention of the board over the next 24 months.

“They will have to squeeze in the time to monitor the continued attempts by County Government and the County Executive to render volunteer fire rescue service providers extinct in a county rich in volunteer fire tradition and dedication.”

RENOVATING THE FALLS ROAD STATION was included in past plans more than six years ago, and was part of the FY11-16 budget.

Cabin John Park Volunteer Fire Department, not the county, owns Station 30 on Falls Road. The current CIP will delete any county funding for improvements to the station, which lacks facilities for female firefighters, and CJPVFD will begin fundraising for the multi-million dollar expansion and renovation.

It was expected that the CJPVFD would build a two-bay addition to the station, and the County would renovate the living space. Cabin John completed its share of the project.

“Cabin John Park Volunteer Fire Department had completed its commitment to this project by completing the apparatus bays,” using its own funds, according to Council documents. “But the question of station ownership was not addressed.” New county regulations require that the County jointly own the station after the project was completed, according to 2010 Council documents.

At a Feb. 24, 2010 review, the County Council Public Safety Committee balked at funding any part of the renovation because “issues have not been resolved regarding ownership of the station after the project is complete.”

This is Station 10, the main Cabin John station.

Executive staff explained that station ownership and other related matters will be addressed through the development of a Memorandum of Understanding (MOU) between the County and the Cabin John Park Volunteer Fire Department, according to council documents from two years ago.

Now, two years later, Cabin John is preparing a fundraising effort to fund the renovations, and the County Executive has removed all funding for the project from the six year Capital Improvement Plan.

The volunteer fire department completed construction of two extra apparatus bays but the additional upgrades to the station have been put on hold.

The current physical size and layout of the station creates lack of facilities for female fire fighters and rescue personnel. Leggett has recommended $500,000 in FY15 to address these issues on an interim basis, according to County Council staff.

“Given that the most pressing facility issue can be addressed in FY15, Council staff concurs with the Executive's recommendation to remove funding from the six-year period and defer the project,” according to Council documents. “This approach will also allow time for the Executive and the Cabin John Park Volunteer Fire Department to continue to work through the outstanding scope and funding issues and return the project to the CIP when it is better defined.”