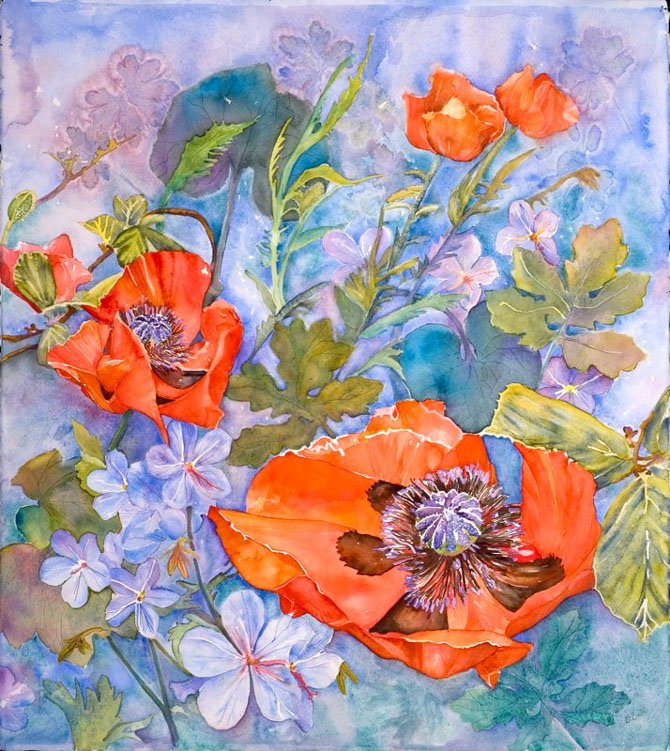 Bell uses her own photographs as a major resource for her watercolor paintings. She focuses in this exhibit on regeneration and renewal in the natural world, her palette reflecting the early light and gentle colors of May along the riverbanks, and in the forests and fields of England and America. She began her formal training in art while on academic leave from university teaching. She worked in studio arts at Montgomery College in the 1980s. Retirement from teaching in Montgomery County Public Schools 20 years later afforded her the time to resume her artwork. See www.bellslessons.com for more information.

Lymn began taking formal collage classes in October 2008. In 2009, she was juried into her first art show, and since then she has been juried into several others. She divides her work into five subject areas: landscape, still life, people, Judaica, and wildcard. For this show, the pieces are exclusively flowers for which she created special Jewish flowers including a Shin Flower, a Vase with Shin Flowers, a Shofar Flower, and a Lily from the Song of Songs. See www.artlymn.com for more images.

Shankman presents his Flemish series of flowers in this show. He first saw this technique of painting when he minored in art history for his AB at Case Western Reserve University. He practiced this style, called Chiaroscuro, when he studied at the Corcoran College of Art and Design. These pictures use light and dark to model the shapes and forms of the flowers and vases. They are done digitally starting out with photographs of flowers, which he grows in his garden. Though decidedly different, they give a feeling of 16th century Flemish art. Visit www.cameraflora.com for more details.

Hendel was an award-winning decorative painter for many years. Several years ago she was introduced to fused glass and became fascinated with the possibilities for expression that glass materials and techniques offer. She now works exclusively in that medium while trying to maintain the perspective that decorative painting provides. She specializes in pet portraits, especially dogs, but also other creatures both real and whimsical. Her fused glass portraits are not based on actual dogs and cats as much as they are reminiscent of everyday lovable mutts and house cats. Just like these mixed-breed pets, these portraits come in assorted shapes and colors; no two exactly the same.

Partington has been doing ceramic art for over 30 years. Her work has evolved to include a combination of whimsical wheel-thrown and hand-built pieces that emphasize her love of and appreciation for animals, birds and nature in general. As a feline fancier — cats have always been a part of her life — she portrays them as functional pieces and decorative objects. She combines different clays for a marbled effect in some of her pieces. All pieces are bisque-fired. Then she adds detailed illustrations painted on with Speedball underglazes and dips the pieces in a transparent glaze. She uses a combination of overglazes sponged on the exterior for mottled color effects. The pieces, including ceramic pitchers, garlic keepers, egg separators, ocarinas, and platters, are then oxidation fired in an electric kiln.