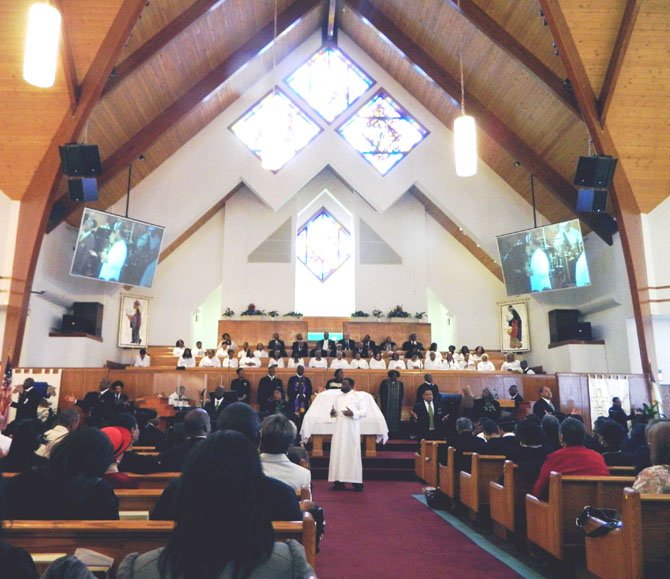 On Feb. 19, the sanctuary at Bethlehem Baptist Church was again filled with worshippers. In white (center) is the Rev. Dr. Darrell K. White. Photo by Ed Simmons, Jr.

By By Ed Simmons, Jr.

Mount Vernon — Feb. 19 was a glory day for the pastor and congregation of Bethlehem Baptist Church, an historic congregation on Fordson Road in Gum Springs dating to 1863. 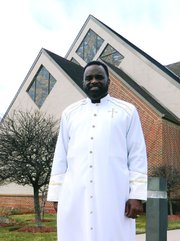 The Rev. Dr. Darrell K. White felt a "weight lifted" when he learned that the sanctuary's upright beams were not structurally compromised.

On this sunny Sunday morning the congregation marched in triumph back into their 900-seat sanctuary which they’d been unable to use since the magnitude 5.8 earthquake of Aug. 23. The towering upright wood-laminate beams that hold up Bethlehem’s soaring cathedral-like ceiling had been cracked. That fateful Tuesday afternoon in August, Bethlehem joined the list of damaged significant Washington-area structures including the Washington Monument and the National Cathedral.

Not knowing if the roof was in danger of collapse was a heavy emotional weight for Rev. Dr. Darrell K. White, Bethlehem’s pastor since 1999.

“It was certainly a setback not knowing whether we’d be able to worship in the sanctuary,” he said. “If the beams had to be replaced we’d be looking at replacing the roof. This would have been a major building enterprise we would have had to embark upon.” Jeopardized were building plans to construct a large education and conference center adjoining the church.

The cracks were not long, about 16 inches in length, but one penetrated an entire beam. As a precaution, while the trustees launched an evaluation of any possible danger, the congregation worshipped across the hall in the multipurpose room. The trustees were guided by trustee secretary Joseph Bunton who’s experienced in architectural engineering.

Called in to conduct a visual inspection, the structural engineering firm Structural Engineering Solutions Inc. of Arlington recommended not using the sanctuary until a physical inspection could be made.

The general contractor that built the church, RE Lee & Son of Charlottesville, was brought in to help. RE Lee was “very helpful,” said Bunton; they called in Dajon & Associates of Hackensack, N.J., who specialize in the repair of wood-laminate beams.

“After Dajon came in and did a detailed structural analysis, the cracking was determined to not be structural,” Bunton said. At last, after nearly six long worrisome months, it was determined that the roof was not in danger of collapse.

“That was a weight lifted that the beams were not compromised,” said White. For last Sunday’s triumphant “Reentry Service” which packed the 900-seat sanctuary, he preached on 2 Chronicles 7:14 – “If my people, who are called by my name, will humble themselves and pray and seek my face and turn from their wicked ways, then I will hear from heaven, and I will forgive their sin and will heal their land.”

The passage, said White, was taken from when Solomon rededicated the Temple. For Bethlehem Baptist, he said, “This dedication that I want to lift up is a call for us to rededicate our lives to our relationship with God, to God’s will and God’s mission of saving lives.”

For a remembrance, everyone attending received a white pebble inscribed on one side “8-23-2011” and on the other “2-19-2012.” “I don’t want the congregation to forget the whole experience of having to move out of the familiar and step into the unfamiliar for worship,” White said.

“I believe it brings a deeper appreciation for God’s presence in the sanctuary itself. Sometimes we can forget that it is a sanctuary and sometimes we carry on so casually that we lose the essence that this is the presence of the Lord. This is His house.”

White also spoke of his and the congregation’s excitement about returning to the sanctuary for worship. “Worship was charged with emotion feeling the spirit of the Lord here and His welcoming us back into the worshipping sanctuary.”