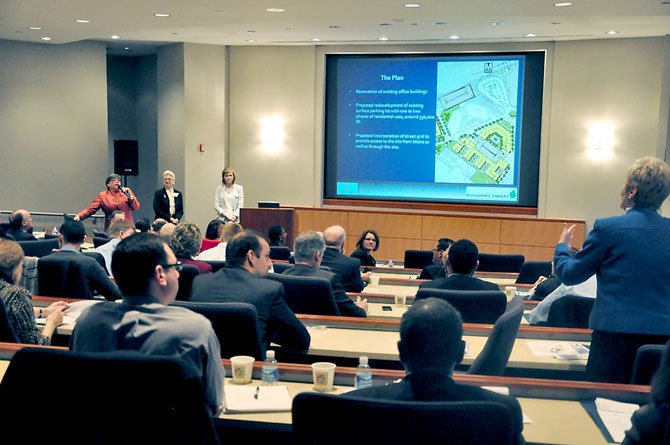 Phase Two will consist of six stations, starting at Reston Parkway and going out to Ashburn, including Dulles Airport.

Various entities, including Fairfax County, Loudoun County, the Town of Herndon and the Reston Master Plan Special Study Task Force, are currently examining what kind of development will allow both landowners and residents to take maximum advantage of the opportunities offered by the Silver Line.

Lisa Gilleran, director of community development for the Town of Herndon, said the town’s forecast for Metro development involved balancing a number of factors.

"The economic challenge we’re facing is to balance traffic impact and public cost and maximize transit oriented features and benefits to the town," she said. "In order to accomplish this, we found balance is achievable with about seven million square feet of development by 2035."

THE TOWN OF HERNDON is planning for development north of the proposed Herndon-Monroe station, while members of the Reston Master Plan Special Study Task Force and others are planning for the parcels of land south of the station.

Fred Selden of the county’s Department of Planning and Zoning discussed how changes to the Reston Master Plan were being proposed to allow for additional density.

"This plan focuses primarily on a half mile around the stations," he said. "We’re looking at and discussing much higher levels of development."

The proposed changes would increase the amount of residential square feet from just under 10 million to more than 20 million and the commercial from around 17 million to 25 million square feet for the three Reston stations at Wiehle Avenue, Reston Parkway and south of Herndon-Monroe.

Selden said a key part of the planning would be to make sure the stations weren’t a disruptive force to the residents and businesses around them, but that they blend in. Because of this, they are examining the land around each station parcel by parcel.

"To really integrate the Transit Oriented Development that’s to come, we really have to make sure it’s integrated with the community at large," he said. "As part of that process we’re looking how to integrate those stations on every level."

Mark Canale, Phase Two manager for the Fairfax County Department of Transportation, said plans for Phase Two are about 30 percent complete, though he called the process dynamic.

He said accessibility to the stations, through a variety of means, would be essential when planning around stations.

"The county continues to look at pedestrian circulation and access to the station," he said. "We’ve had a number of adjacent landowners come up to us and make recommendation for the street grids."

PHASE TWO PLANNING will progress throughout this year, with preliminary engineering expected to be completed this month, and then Fairfax and Loudoun Counties will have 90 days to review the proposals.

The environmental review and approvals required by the National Environmental Policy Act are expected to be complete by June, and design-build proposals will be taken throughout the end of the year with the contract being awarded in January 2013.