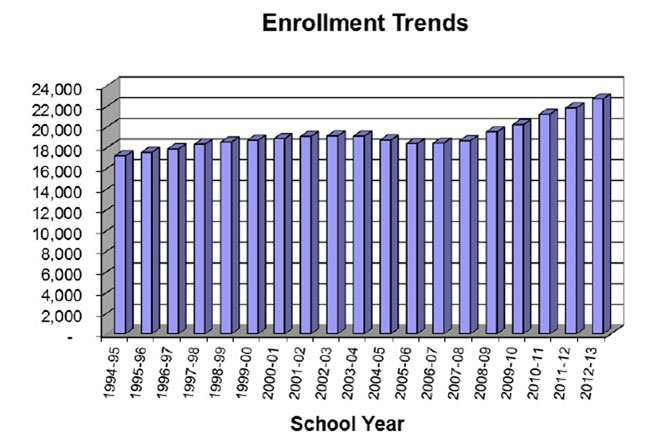 With Arlington’s classrooms bursting at the seams, school officials say there’s no end in sight. This year, 850 new students are expected to walk through the door. That’s equivalent to one of the county’s largest elementary schools or one of its middle schools. About 30 percent of the county’s schools are already exceeding capacity. Next year, more than half of the schools will be at or above capacity. By 2016, that figure will spike to 90 percent.

“We are growing,” said Superintendent Patrick Murphy. “And that’s a reality we are going to have to address.”

The superintendent’s plan to address that reality involves a measure that is likely to be unpopular with parents — increasing class size. Murphy said that making no change would cost the school system $8.3 million in staffing and relocatable classrooms. And he said the county would have to hire 69 new teachers under that scenario. Instead, the superintendent plans to raise the maximum by one student in all grades, Kindergarten through 12th grade.

“We are not making any cuts,” said Murphy. “Folks are not losing their jobs. We’re going to have to go out and hire new folks and attract them to come here.”

ARLINGTON COUNTY has the highest per-pupil cost in the region for the last four years, according to an analysis by the Washington Area Boards of Education. School officials say that figure, which amounts to $18,400, is an indication of the relatively small class sizes for the region and the high education levels in the county. About 70 percent of the county staff members have a master’s degree or higher, and the county has some of the lowest class sizes in the region.

“I very much realize this is not an easy decision,” said Murphy. “But we’ve got to think forward and proactively think about how we are going to need to be addressing this, and then how does our capital plan figure into all of those pieces, and I think the solution that we are proposing here will work, and I think it will ultimately benefit kids at the end of the day.”

THE SUPERINTENDENT’S proposed budget is a $493.8 million spending plan that represents a 4 percent increase over last year’s operating budget of $475 million. In addition to raising class sizes, Murphy’s budget includes $6.2 million for a 2 percent cost-of-living adjustment for employees, $800,000 for new science textbooks and $83,000 for a new substance-abuse counselor. The superintendent said the new substance-abuse counselor was in addition to the current 2.5 positions already in the budget.

“Substance abuse is a reality. I wish it wasn’t. I wish kids were not drinking and using illegal drugs,” said Murphy. “But at the same time, we’re dealing with issues that we can’t avoid, and if we are going to help kids this is the way it needs to happen.”

One external factor the school system has to address is the rising cost of the Virginia Retirement System. Republican Gov. Bob McDonnell’s proposed budget has a rate of 11.66 percent. That’s a drastic increase of the current rate, which is 8.23 percent. For Arlington Public Schools, that’s a $15.7 million increase — a 56 percent spike. Murphy was quick to note that the situation in Richmond has yet to be resolved, and the House and Senate have to agree on a budget before Arlington will have a definitive number to calculate its responsibility to the Virginia Retirement System.

“This situation is fluid,” said Murphy. “This is probably one of the areas we are going to come back to as we move through budget season.”

UNLIKE MANY JURISDICTIONS in Virginia and across the county Arlington has benefited from a strong real-estate market. The residential market continues to be the strongest in Northern Virginia, easing the pressure on the school system to do more with less. The superintendent said he remains “cautious” about the strength of the market, although the county transfer remains at 46.1 percent. That means more money for the school system.

“Overall, this budget represents a modest proposal,” Murphy wrote in the introduction to the budget. “Unlike the last several years, however, we were able to make very modest improvements while limited expenditure cuts to our instructional programs.”