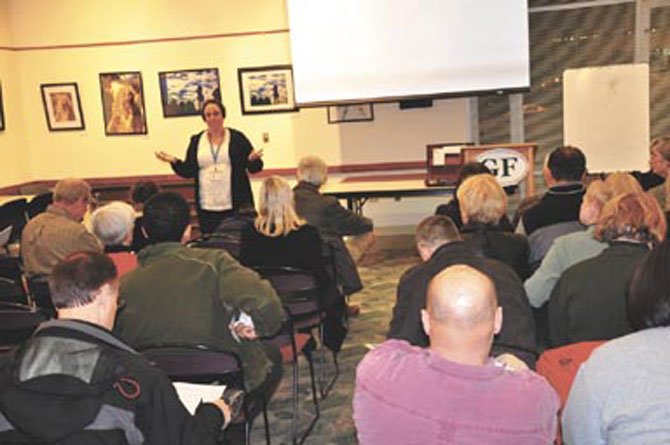 Great Falls — The Great Falls Citizens Association and the Fairfax County Police Department spoke with homeowners associations around the community Tuesday, Jan. 10 at the Great Falls Library in an effort to improve communications between residents and the police, as well as discuss the idea of neighborhood watches.

PFC. KATY DEFOE, Crime Prevention Officer for the Reston District Station, spoke about neighborhood watches and how they help the police. She said a watch can be anything from an e-mail chain to something more official.

"With a watch comes a greater source of information, both for the police and the community, and it goes both ways," she said. "The people in the community know each other, they know when the neighbor is on vacation, so then they’ll notice something amiss if a moving truck shows up at their house."

Defoe pointed to a recent string of vandalisms from Jan. 1 to Jan. 4 when several mailboxes were smashed.

"We didn’t get one call until the day after, but we found out a lot of people heard the mailboxes being smashed," she said. "Remember, you’re not wasting our time for calling about a strange noise or something, that’s our job to check it out."

George Newman lives in Riverbend Meadows, one of the neighborhoods that had "about eight or nine" mailboxes smashed. He said his neighborhood has an e-mail tree, but no official neighborhood watch.

"The most recent victims would have called the police right away, but they came home at around 10 p.m., and the mailbox was still there," he said.

Defoe said that the smashing most likely occurred between 1 and 3 a.m., and "that it usually turns out to be kids who are out of school."

RESIDENTS who attended the meeting had neighborhoods with various levels of a neighborhood watch, and some that didn’t have one were interested in creating one.

Jennifer Bell says when her neighborhood decided to start a watch, they contacted the police department, who sent an officer for a few meetings. She said it has helped open the lines of communication around her neighborhood.

"We’re a passive group, we don’t have people in red berets patrolling the streets every night with batons," she said. "We have a sign at the beginning of our neighborhood, which I truly believe helps. A lot of the amateur burglars and kids, I think they see those signs and it makes a difference. It is a very valuable program to have, and you don’t have to do a lot to be a part of it."

Jennifer Legler said she would be interested in helping bring a watch to her neighborhood, but she was interested in what kinds of crimes they could be used to prevent.

"If I’m going to go to my neighbors, I would like to have the type of crimes that we can prevent as sort of a carrot to put out there to entice them," she said. "I have a neighbor who had his mailbox smashed, and when I asked if he wanted to call the police, he laughed and said it was probably payback for when he did it as a child."

Steve Stennett, president of the Seneca Hills homeowners association, says his neighborhood had a watch for a while.

"It was amazing how it worked, if anything happens internally, phones would ring immediately," he said. "Plus we were able to keep an eye on each other’s kids when they were out playing, as well as traffic if we noticed teenagers speeding through."

Dorry Emmer, who lives in Colvin Meadow Estates said her neighborhood has an e-mail tree.

"We know each other since we have two or three functions as a neighborhood per year, so we know who is supposed to be around and who isn’t," she said. "But the biggest problem is reaching people about issues outside of our neighborhood, the ones that involve all of Great Falls."