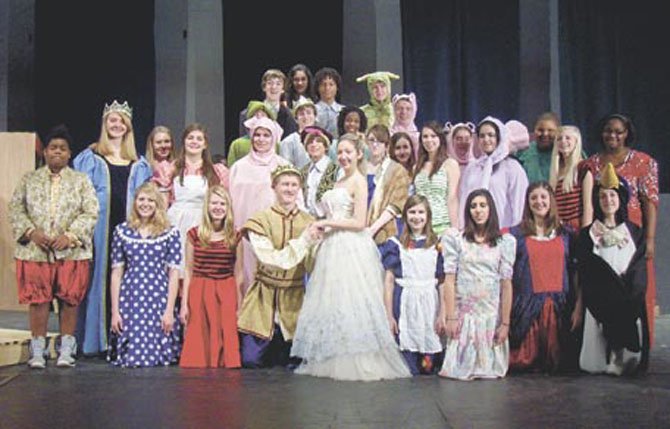 Chantilly — Although the story of Cinderella is one that’s well-known, leave it to Chantilly High to tell it in a new and hilarious way.

“I chose it because I appreciate shows that are entertaining for the entire family,” said Director Shannon Khatcheressian. “There are fun jokes and humor for the adults, and physical comedy for the children to enjoy.”

The actors are mainly freshmen and sophomores from Drama I and II classes. There’s a crew of 15, and the play is double-cast, with 25 performers in each cast.

“This group really has a natural ability for comedy,” said Khatcheressian. “They’ve been really creative in making the characters their own and adding comedic elements I hadn’t even thought about.”

The story, she said, is “a twist on the original, Cinderella fairytale we’ve all grown up with. But a fairytale fixer reveals the real story of Cinderella — and we meet a lot of the fairytale characters along the way.”

The action takes place in Cinderella’s house and in Prince Charming’s castle. “It’s a lighthearted and silly show,” said Khatcheressian. “Parents are always looking for outlets for their kids in the wintertime, and this is an opportunity for the entire family to enjoy a fun and affordable night of theater.”

Playing Cinderella is junior Natalie Spitzel. “She’s very optimistic,” said Spitzel. “Despite the fact that her stepsisters and stepmother are evil to her and make her do the chores, she still believes it’ll all pay off and they’ll invite her to the ball with them.”

Thrilled to have this role, she said, “Ever since I was little, I’ve been in love with Disney princesses and I’ve seen all the movies, so I’m so excited to play her. It’s always been a dream of mine.”

Spitzel also loves being in children’s shows. “You get to have big, goofy expressions and see the children really react, jumping up and down in their seats,” she said. “They’re going to love Cinderella’s childlike wonder, as well as the costumes from a whole mishmash of fairytales.”

Sophomore Sam McKee portrays Prince Charming. “He’s sort of goofy and has some weird, little hobbies — such as collecting American Girl dolls,” said McKee. “But he wants to find his true love and get married soon.”

He’s enjoying this part because, “Since I’ve got a lot of lines, I can do more with this character,” said McKee. “And Prince Charming’s involved with lots of the other characters, which is fun, so I’m on stage most of the time.”

In children’s plays, he said, “You get to just be young and silly and express yourself in strange ways. It’s a friendly and creative show with jokes that are both stupid and witty.”

Playing O’Reilly the Fairytale Fixer is sophomore Chris Knarr. “The play begins with the wrong Cinderella and Prince Charming getting married, so I have to fix it and find the right characters,” he said. “Along the way, I encounter all sorts of other fairytales that need fixing.”

His character is serious, and initially upset at the mix-ups. “But he sometimes makes cheesy jokes,” said Knarr. “I wear a sparkly outfit and my assistant carries everything I need to fix the fairytales. There’s a fun cast and lots of room where we can change the script. And it’s different for me to play a character outside the main action of the story.”

Freshman Marcellus Willoughby plays O’Reilly’s aide, the Silent Assistant. “He uses expressions and doesn’t talk much,” said Willoughby. “He’s friendly and helpful; he follows O’Reilly around and gives him whatever tools and props he needs. It’s a great role because it’s a challenge not talking. And I move around on stage and pull out funny props from a trunk.”

Willoughby’s glad to be in the show because “you get to meet people you haven’t seen around school and express yourself through your character. Kids will like our bright clothing and the way the actors talk in their characters’ voices.”

A junior, Gorur keeps things organized for the director and works with the actors, giving them lines during rehearsals. She also choreographed two of the big dance numbers to the songs, “Celebration” and “The Hustle,” for the prince’s ball. She liked working with the underclassmen and said the cast wanted to do a rousing, exciting dance for the ball, instead of a slow one with people curtseying. That way, said Gorur, “The kids in the audience can get up and dance and jump with the actors.”

It’s her second time stage managing and she loves it. “It gives me an eye into what Mrs. K. looks for in an actor,” she said. “I’ve learned to follow her advice to the letter and make sure everybody else does, too. This show has physical humor for kids and pop-culture jokes for adults. And the actors break the ‘fourth wall’ and interact with the audience, so children will literally see their storybook characters come alive.”