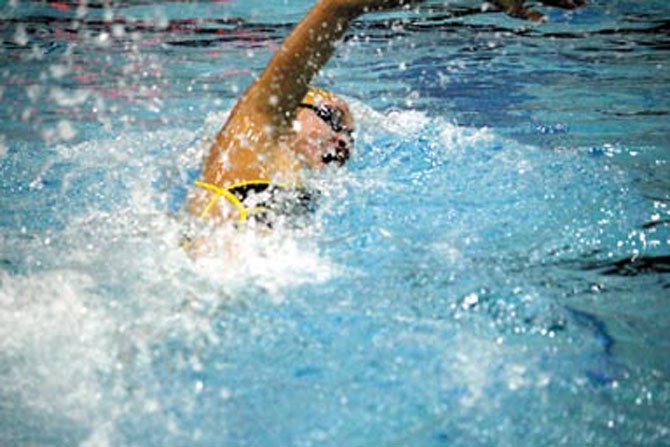 Janet Hu competes in the 200-free event during Oakton's victory over Chantilly. Photo by Katie Pierce

By By Katie Pierce

Vienna — Oakton High School's varsity swim and dive teams took to the water against Chantilly High School on Friday night, Jan. 6 at Oak Marr Recreation Center. Oakton's boys and girls fought to the finish, and held tight to their undefeated record this season. The boys won 160-155, and the girls won 177-135.

"It was a really close meet - closer than we had anticipated, but we pulled through in the end," said Stephanie Hallock, one of the Oakton team captains. "If we keep up the hard work, there's a definite possibility of an undefeated season and a shot for the state title."

Philip Hu took first place in both the 100-back and fly events.

Oakton, in its most recent meet last Friday night, went head to head with Robinson Secondary for the second time this season at Cub Run Recreation Center. Oakton's boys and girls both had a strong meet, staying undefeated. The boys won 202-113, and the girls won 192 - 123.

The meet started off with Senior Recognition Night. Dr. Banbury, the Oakton High Principal, and Pat Full, Oakton's Athletic Directory, were on deck to pay tribute to the Cougar team's 20 graduating seniors.

"We got to pay tribute to our 20 wonderful senior swimmers and divers who have done so much for our team over the last four years," said Meltz. "We will definitely miss their contributions to the team after they graduate. We are excited to have both our boys' and girls' teams undefeated going into our last dual meet. We are hoping to finish up the season undefeated in our last dual meet next weekend and then look forward to an amazing championship season."

Oakton dive had another week of strong performances off the board, as Joe LeBerre took second for the boys.

Oakton will return to the pool for the last meet of the regular season at 8:30 pm Friday, Jan. 20, against Robinson Secondary at Audrey Moore.