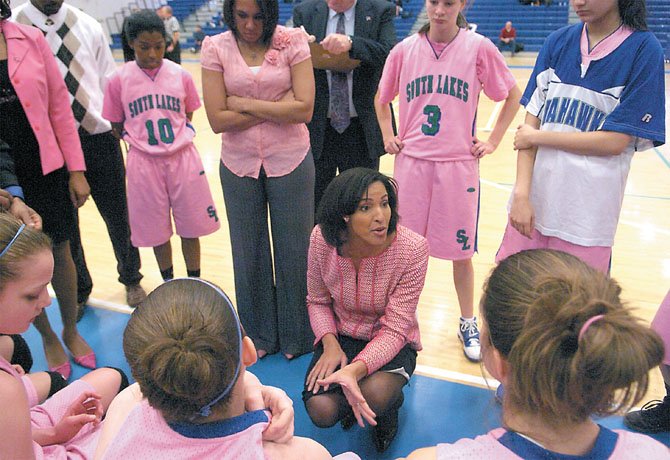 Fairfax — The Fairfax High girls’ basketball team did not stay down for long following a 58-46 Liberty District loss to first place Madison High on Monday, Jan. 17. The setback, which snapped a three-game win streak for the Rebels, hardly had a lingering affect for Fairfax, which came back to win its next two district games on the road.

Fairfax, three days following the loss to Madison, won at Marshall High, 62-54, last Friday night. Then, in their following game this past Monday night, the Rebels won at Jefferson, 66-42, to improve their overall record to 10-6 and district mark to 6-3.

Fairfax had a huge game from Liz McNaughton in the win over Jefferson, scoring a career and game-high 33 points. The versatile senior forward, who will be attending the University of Maryland, Baltimore County (UMBC) next school year on scholarship, is leading the Rebels this season with 16 points and 12 rebounds per game. McNaughton, who is an affective player both inside and outside of the paint, is shooting an impressive 46 percent from three-point territory.

In the win over Marshall, Fairfax received a balanced scoring attack led by NcNaughton’s 23 points and 12 rebounds. Other Fairfax players in double figures in the win were Berry with 12 points and Daguih (6 rebounds) with 10 points. Also, junior guard/forward Vania Irigoyen (4 rebounds) contributed eight points and sophomore guard Christina Williams six points. Howard brought down 10 rebounds for the Rebels.

FAIRFAX RECEIVED a tough blow in their final game of December when its’ starting point guard, sophomore Kylie Murphree, was injured in a 57-42 district home win over Jefferson in the team’s first meeting of the season versus the Colonials on Dec. 20. The solid backcourt player, who was averaging 12 points, four rebounds, and four steals per game, has been undergoing rehabilitation for her injury.

The coach said he is uncertain whether the standout player will return this season. Murphree’s best scoring games this winter came in her team’s December home wins over both Centreville (25 points) and Marshall (23 points). Last year as a freshman, she averaged eight points and three rebounds and earned All-Liberty District Honorable mention honors.

“It was a major blow,” said the coach, of losing playmaker Murphree to injury. “She’s our leader on offense and defense. We had to look for a new identity [following the injury] and come together as a team.”

With Murphree out of the line-up, Berry, also a sophomore, is handling a lot of the team’s point guard duties. Berry, who is playing outstanding off the bench for the Rebels, is averaging 10 points and three assists per game.

Another sophomore backcourt player having a strong season is Williams, a starter averaging six points a game. She has converted 22 three-pointers on the season.

“She has been very consistent on both ends of the floor, and she is a leader too,” said Konde, of Williams. “She did not play much last year but worked real hard in the offseason.”

Fairfax has received an outstanding first season from freshman post player Daguih, who is averaging eight points and 10 rebounds a game.

“She has been playing with confidence and realizes she can play with any center in the district,” said Konde, of the ninth grader.

Fairfax’s team captains this season are McNaughton and Intermill.

Coach Konde said a key to his team’s good play thus far has been its team mindset of playing as a unit.

“I think if we continue to play together we should be able to contend with the rest of the district,” he said. “We need to focus on ourselves [as a team] and realize it’s going to take team basketball to win. I tell the [players], `assists and rebounds will make us very successful.”

On Thursday night, Jan. 26 of this week, Fairfax will be hosting Langley for a district contest set to begin at 7:30. Next Tuesday, Jan. 31, the Rebels will be at home versus district opponent South Lakes.