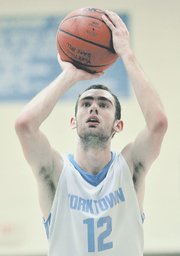 Jack Earley, seen against Stuart on Dec. 16, and the Yorktown boys basketball team beat Edison 54-52 on Jan. 20. Edison entered the contest undefeated in the National District.

Yorktown traveled to face Stuart on Jan. 24. Results of the game were not available prior to the Connection’s deadline. The Patriots will travel to face Falls Church at 7:45 p.m. on Friday, Jan. 27. Yorktown’s next home game is Jan. 31 against Washington-Lee.

The Yorktown girls basketball team lost to Edison 48-38 on Jan. 20. According to stats from the Washington Post’s Web Site, Lauren Dresser led the Patriots with 10 points. Haley Molnar scored eight points and Ellen Nye and Emily Rebh each had six.

Yorktown hosted Stuart on Jan. 24. Results of the game were not available prior to the Connection’s deadline. The Patriots will host Falls Church at 7:45 p.m. on Friday, Jan. 27.

The Yorktown swim and dive teams had their first meets in the new YHS pool, facing cross-town rival Washington-Lee. Both YHS and W-L were undefeated before their dual meet on Jan. 20. At the end of the night, the YHS girls emerged with a win to remain undefeated for the season with a 7-0 record, and the W-L boys edged the Patriots, leaving them at 6-1.

The boys lost their meet by a final score of 161-154, but had many fast swims and challenged the W-L team with their depth even in races where they did not have first-place finishers. Max Fish was a double winner with first-place finishes in the 100 free and 100 breast events. Will Tarkenton finished first in the 200 IM event. The boys 200 medley relay also finished first (Tarkenton, Fish, David Emson, Jason Henley). 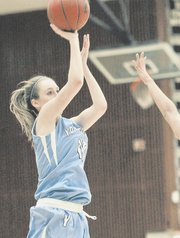 Emily Rebh, seen against Mount Vernon on Jan. 9, and the Yorktown girls basketball team were in third place in the National District through eight games.

The Patriots return to the pool next weekend for the district championship meet which will be held at the new Yorktown pool. The dive events will be held on Thursday, Jan. 26. Swim preliminaries will take place on Friday, Jan. 27, with finals on Saturday, Jan. 28.

The Yorktown wrestling team finished 3-4 at the National District Duals on Jan. 20 and 23 at Mount Vernon High School. The second day of competition, originally scheduled for Jan. 21, was postponed due to inclement weather.

The Patriots will host Falls Church and Stuart on Wednesday, Jan. 25. The National District tournament is Feb. 4 at Stuart.