Alexandria — T.C. Williams and West Potomac are rival high schools, but one wouldn’t have known it on Monday.

During West Potomac’s only home gymnastics meet of the season on Jan. 23, the Wolverines and Titans rotated through the competition as a group, checking in together at each event. Actually, there was only one Titan in the bunch — Grace Girard, the lone member of the T.C. Williams gymnastics team. And not only did the Wolverines accept her, they kind of enjoyed having her around.

"She’s a really nice girl and she’s so good," West Potomac junior Marien Voorhees said. "It’s really nice having her. It’s easier to see her do skills and be like, ‘Oh, that’s how you do that.’" 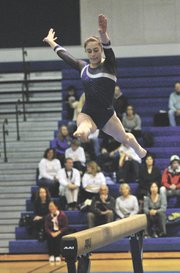 Girard, who attends T.C. Williams’ Minnie Howard School for ninth-graders, is a member of the Arlington Aerials gymnastics club and has been participating in the sport for about a decade. After deciding to compete at the high school level, Girard had to wait while it was determined which meets she would attend and which schools she would join for practice.

"My school didn’t originally have a gymnastics team," Girard said, "so I had to get it all started. I know other people at other gyms, so it’s not like I’m totally alone."

Girard has worked with gymnasts from West Potomac and their head coach, Pete Novgrod, for the last month. Her first high school meet was Jan. 18 at Edison. Rotating with the host Eagles, Girard had a successful high school debut, winning the all-around competition.

"Today was not my best meet, but it’s OK," Girard said. "Everyone has bad meets."

Was it awkward competing with the Wolverines, or do they treat you like a teammate?

"They treat me like a teammate," she said. "They cheer for me."

Girard is a club teammate of West Potomac sophomore Monica Thompson, and their friendship helped make the arrangement more comfortable.

"I really like it because Grace and I are good friends at club," Thompson said. "I was excited when she said she wanted to do high school gymnastics. She’s practicing with us. I think it’s fun. I think the first day it was kind of weird because she didn’t know anyone, but I think everyone’s really accepted her."

"She’s a really nice girl and she’s so good. It’s really nice having her. It’s easier to see her do skills and be like, ‘Oh, that’s how you do that.’"

Novgrod called Girard "a very clean gymnast," and said she had no ceiling in terms of what she could accomplish in the future as a high school gymnast.

"She could be really good in high school," Novgrod said.

The Patriot District meet is scheduled for Feb. 2 at Lake Braddock. Girard said she is more concerned with hitting her routines than winning. As for her sophomore season, Girard plans on her teammates being from T.C. Williams.

"It’s fun," Girard said about being the school’s lone representative. "I’m going to have more people [compete] next year."