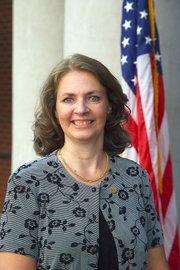 Town of Herndon Mayor Lisa C. Merkel and members of the Herndon Town Council approved a resolution naming Connie Haines Hutchinson as vice mayor for the town for the 2012-14 term.

Hutchinson, who grew up and raised her family in Herndon, was first elected to the Town Council in 1992 and previously served as Vice Mayor during the 2008-2010 term. She has achieved designation as a Certified Local Government Official of the Virginia Elected Officials Leadership Academy, and she completed the Virginia Mayors Institute, sponsored by VML and the Weldon Cooper Center for Public Service. She has chaired the Virginia Municipal League’s (VML) General Laws Policy Committee and currently serves on VML’s Community and Economic Development, and Legislative Committees. She also serves as secretary of the Dulles Area Transportation Association (DATA) and represents Herndon on the town’s Inter-jurisdictional Committee with Fairfax and Loudoun Counties.

Visit the town online at www.herndon-va.gov.